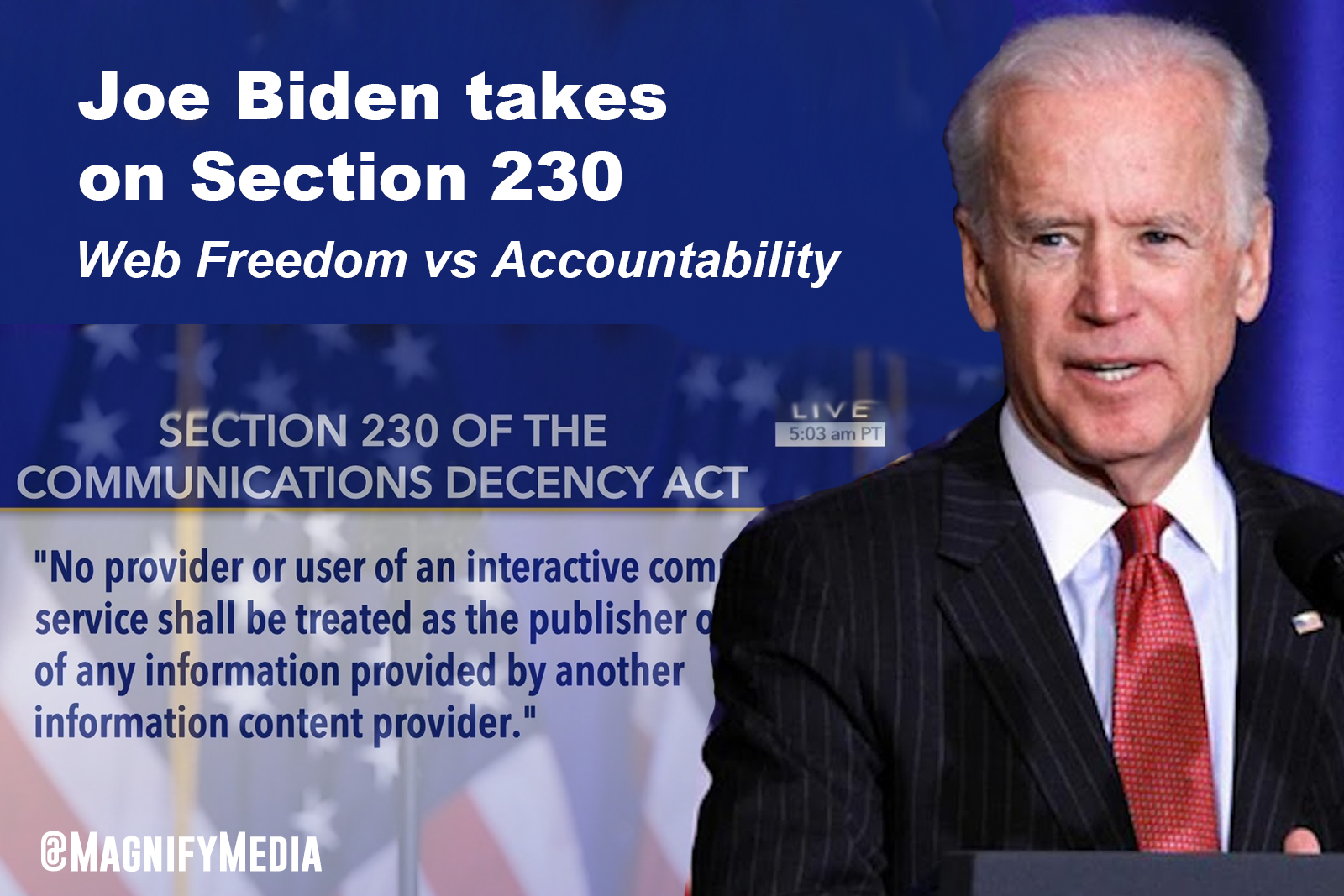 Take a look at this number: 230. Do you know what it means? If not, today is a good day to learn about it, because the future of the internet as we know it may be riding on the preservation or renovation of Section 230 of the 1996 Communications Decency Act (CDA).

Section 230 is what the Electronic Frontier Foundation calls "one of the most valuable tools for protecting freedom of expression and innovation on the Internet."

Section 230 says that "No provider or user of an interactive computer service shall be treated as the publisher or speaker of any information provided by another information content provider.”

Simply put: Platforms are NOT publishers, and therefore can’t be held responsible for what is published on their sites by their users.

It’s been 24 years since the so-called “safe harbor provisions” in the CDA were passed, and that law has let sites like YouTube and Vimeo allow user-generated content to be uploaded. It created the environment for user-generated reviews on Yelp and Amazon to be published. It allowed Craiglist to host user-posted classified ads -- and, perhaps most importantly, for Facebook and Twitter to provide the frictionless publishing of comments, images, and often controversial posts from hundreds of millions of Internet users.

Section 230 was the legal backbone that created what we now think of as the open and free internet. But it wasn’t simply a free pass for platforms. They did need to create a mechanism for notification of copyright violations and provide a way for content that was in violation to be taken down.

But the legal exposure to being sued for defamation wasn’t able to be made against platforms, because they weren’t publishers and didn’t have to review and take responsibility for what they published.

These companies are now massive, powerful, and editorially engaged. They are, by any reasonable measure, publishers. The invite content, they manage speech that is hateful, threatening, and often defamatory. And increasingly, their advertising is being purchased, and targeted, and gamed to impact the outcome of what should be free and fair elections.

There’s a growing number of voices calling for changes in the way CDA 230 is framed. Some want it updated, others want it struck down.

In an interview in The New York Times, former Vice President Joe Biden called for Section 230 to be “revoked, immediately.” And he didn’t stop there,  noting that "for Zuckerberg and other platforms,” 230 "should be revoked because it is not merely an internet company. It is propagating falsehoods they know to be false.”

Republicans have made similar charges. Both Sen. Josh Hawley (R-MO) and Sen. Ted Cruz (R-TX) have suggested that the way to address what they see as platform censorship is to make changes to 230.

Yael Eisenstat, a former CIA officer and ex-global head of Facebook's elections integrity ops unit, says 230 is “basically a subsidy that says internet platforms will not be responsible for the content they host.”

Eisenstat is not alone in her concern that platforms' current business model, without any responsibility for the content they serve, is poised to have a dramatic impact on the upcoming presidential election.

Eisenstat, Weintraub, and the UN’s David Kaye are going to be debating the future of Section 230 in a session at this year's March South By Southwest conference that I’m going to moderate.

Kaye is the UN's Special Rapporteur on the promotion and protection of the right to freedom of opinion and expression. He is in favor of protecting section 230.

So it’s a smart group, with some pretty divergent opinions. If you want to be part of a serious debate about the future of the internet, you can read about it here.