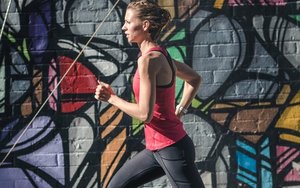 The Super Bowl’s ad inventory may have sold out early this year, but that’s not stopping running brand Saucony from getting in on the action. The 122-year old company is readying an ad on Fox’s streaming platforms during the game that  “highlights a big thing we have to say about sustainability, focusing on a specific product we have in development,” says Don Lane, Saucony’s CMO.

“It will take our sustainability message to the next level in a way that is meaningful to our customers and breakthrough for us," he adds.

Lane tells Marketing Daily the effort is themed “One small step towards doing what’s good for our world.” It’s part of a follow-up to the “Run for Good” campaign launched last summer.

The company’s target audience continues to be serious runners. “But beyond that, we call them pacesetters, and they over-index on the things that make them the tip of the spear of what’s going on in culture,” Lane says. “They’re environmentally conscious and early adopters of new technology. Sustainability is good for our brand in general, but especially resonant with this audience.”

Sales have been solid at Saucony, which is based in Waltham, Massachusetts. It typically ranks among the top-selling brands for serious runners, a category led by Brooks. But overall, times are hard in the running shoe business, as consumers continue to step toward casual kicks, especially retro styles.

The NPD Group, the Port Washington, New York-based market researcher that tracks athletic apparel, says that sales of casual sneaks are up 7% in the last 12 months, while performance shoes -- including specialty running shoes -- are down 4%.

Lane says the decision to buy into the digital Super Bowl stems from the company's experimentation with connected TV. Last quarter, it found one test generated a 29% increase in search volume.

He says the company is still rushing to finish the creative, which it expects to release before the big game. “We had an opportunity that we jumped on. So we’re hustling. The Super Bowl itself can be a fleeting moment, and we intend for this to be more enduring. We’re still deciding how we’re going to spoon it out.”

Saucony is owned by Wolverine World Wide, based in Rockland, Michigan. It says the sales of Merrell, Sperry and Saucony all rose more than 11% in the most recent quarter, in constant currency.