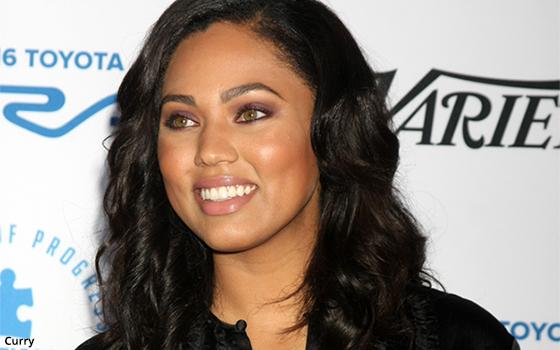 The new magazine, which does not yet have a title, will feature Curry’s tips and point of view on food, family and home.

The premiere issue will debut on newsstands nationwide in May 2020 with a cover price of $9.99 and an initial newsstand print run of 400,000.

“We’re embracing exceptional talent who are transparent and open about their lives in a way that can only be encompassed by print,” Doug Olson, president of Meredith Magazines, told Publishers Daily. “This medium provides an unmatched opportunity for celebrities and influencers to communicate in a closer, more intimate way with their fans.”

Curry stated she is "overjoyed" to share her "lifestyle philosophy about the subjects I deeply care about — family, friendship, food, community and home — with a new audience and in a new format."

She added: "As a woman of color, it's important to me that media reflects real, relatable women, and I'm excited to create an outlet for young men and women that celebrates diversity and inclusivity."

Meredith said the quarterly will limit its ad opportunities to premium clients to reach "a high-quality audience.”

Curry has her own line of cookware, bedding, jewelry, kitchen textiles and meal kits. She is also is an ambassador for No Kid Hungry, an organization fighting to end childhood hunger. She and her husband founded charity Eat. Learn. Play.

Meredith also produces a magazine with Chip & Joanna Gaines, known for their HGTV series “"Fixer Upper.” The Magnolia Journalreported at the end of 2018 that its audience had grown to over 5.5 million in just two years.

“Collaborating with celebrities and influencers by presenting them with a print platform is an attractive prospect to us. We have a proven record for investing in dynamic personalities that deliver a passionate and loyal consumer base,” Olson told Publishers Daily.