Wired: Trying To Make Sense Of How We Watch TV Now 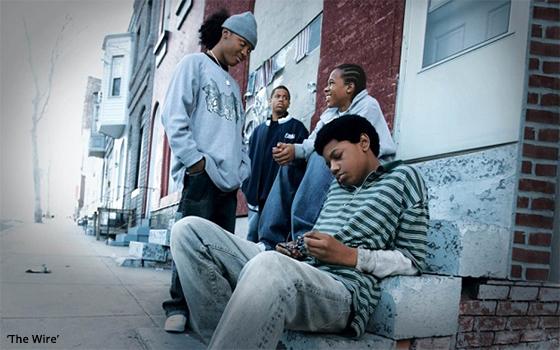 A young man standing near me in a crowded New York subway car was staring directly downward at his smartphone.

I discreetly looked down in the same direction and saw what he was watching. It was “The Wire.” It looked like Season One, which premiered nearly 18 years ago on HBO in June 2002.

It should go without saying, but “The Wire” is widely considered to be one of the finest TV series ever made.

In my own career history, Season Four of “The Wire” (2006, pictured above) stands out as perhaps the finest single season of any TV show that has ever been produced. Period.

One of the chief attributes of “The Wire” that made it so attractive was the quality of its production. Simply put, it looked great.

The show represented a very high level of technical filmmaking for television -- which brings me, in a roundabout way, to the point (if there is one) of this TV Blog posed in the form of a question.

Which is: How can one truly enjoy or appreciate a show such as “The Wire” or various other shows of similar quality on a small screen such as a smartphone, and in an environment such as a subway or other public space in which distractions are constant and plentiful?

Or perhaps to put it another way: Does a person using a cell phone to watch what is essentially a work of cinema then miss out on having the best possible experience watching the show? Does today's watch-TV-anywhere generation even care about such considerations?

It may have made for an illuminating conversation to quiz the young man standing near me on these issues, but I make a point of not socializing with strangers on subways. But seeing him watch “The Wire” in this way made me think about the ways in which we consume television now.

Flat-screen TVs of all dimensions -- small, medium, large and extra-large -- are widely sold for home use. But I would be willing to bet that the middle range of these products are less popular for consuming video content than the screen sizes at the outer ends of the spectrum -- small screens on smartphones on one end, and very large flat-screen TVs (say, 65 inches and up) on the other end.

It is easy to categorize the two extremes, at least in theory -- smartphone screens are likely used most when one is out-of-home and on the go (and possibly for solo, or personal viewing while at home too). The big-screen TVs are for relaxing at home in quasi-home theater settings such as great rooms and media rooms.

With the smallest and the largest of the equipment providing such different viewing experiences, doesn't it stand to reason that the types of content viewed on them would vary accordingly?

One would think that a person interested in watching “The Wire” would save it for the home experience or environment. Or maybe that's just an older person's way of thinking.

My own memory of “The Wire” was that it was a complicated show. The language, the numerous characters and the many interlocking story lines and relationships demanded a high degree of attention. How can all of this be absorbed and understood on a New York City subway train?

While thinking about the subject of this TV Blog, I formed a theory (wholly un-investigated and unproven, of course) that the small size and portability of smartphone screens might be the reason why so many unfunny comedies are made for TV today.

Perhaps they “travel” better than comedies that cause a viewer to laugh out loud.

Maybe today’s comedies in which there is so very little actual comedy (such as the new “Awkwafina Is Nora From Queens,” reviewed here last week) work better in the public realm of out-of-home, personal viewing because they elicit almost no emotional reaction -- and as a result, do not call attention to the person watching them.

Recently, two young people in their twenties informed me that have lately been binge-watching “The Sopranos” for the first time. Like “The Wire,” “The Sopranos” would seem to be best enjoyed in a quasi-cinematic setting, definitely in the home.

I never found out what they were watching the show on, but I hoped that, for their sake, they were using equipment that was equal to the task.