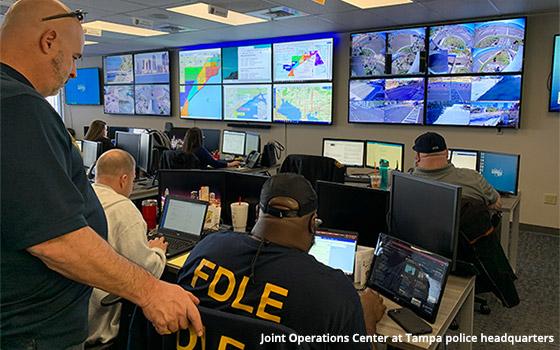 While digital voice assistants, various forms of artificial intelligence and high connection speeds like 5G are the promise of a connected future, the current state-of-the art resides with the traditional screen.

While various new technologies are coming along, the screen remains the go-to place for advertising, marketing and consumer consumption.

While voice is growing, as we regularly document here, it remains in the shadow of the screen.

Rather than screens shrinking in prominence, they’re growing and expanding in usage.

This is being fueled by the decreasing prices of both screens and remote camera technology.

At CES, Samsung subsidiary Harman featured a host of new screens coming to cars, including screens that include replacing car rear view mirrors, with content from cameras destined to replace side mirrors in cars.

Other sensing technology is coming along with the explosion in the number of cameras and screens being deployed for a range of measuring activities.

At the recent National Retail Federation (NRF) Big Show in New York, LiDAR (light detection and ranging) technology was displayed for use in stores to identify and track shopper movements.

While LiDAR doesn’t identify individuals, the sensing technology can quickly create digital 3D representations of the target. It’s an extension of the type of technology often used by police to identify speeding cars.

Despite all the advances in technology, one of the most straightforward deployments still is the sending of video from cameras to screens, the most obvious being via traditional TV.

In the home, TV screens continue to reign, with 2020 shipments in the U.S. projected to reach 41 million units, according to the latest forecast by the Consumer Technology Association (CTA).

Over the weekend, I spent some time viewing another use of screens, both large and small, all being tapped to monitor a massive market in real time.

A mammoth parade, one of the largest in the U.S., called the Seminole Hard Rock Gasparilla Pirate Fest, has been held in Tampa, Florida, annually since 1904, drawing a reported average of around 300,000 attendees.

The screens story is in the Joint Operations Center at Tampa Police headquarters.

The room contains more than 85 screens, including a wall of 20 large screens where live streams from cameras around the city are transmitted in real time.

Most of the three-dozen manned PCs have four screens each, with the ability to transfer what they’re seeing to the big screens in the front of the room.

“This is the hub where all of the information comes,” Usilia Emilione, the Tampa police sergeant running the Real Time Crime Center told me.

Police chiefs from around the U.S. toured the facility over the weekend as it ramped up for the Gasparilla parade.

As we saw at the NRF Big Show, relatively low-cost cameras are becoming ubiquitous and can be used to track shopping behavior to create better in-store traffic flow, product placement and personalized marketing by sending messages to in-store screens.

That same type of technological approach is being used by the Tampa police department but sending information to screens that are constantly monitored by law enforcement during major events. Any issues identified could be used to notify any of the 1,000 police officers positioned in, around and throughout the parade.

LiDAR, artificial intelligence and automated voice messaging are highly likely down the road, both for retail and for events like the Tampa police tracking of Gasparilla.