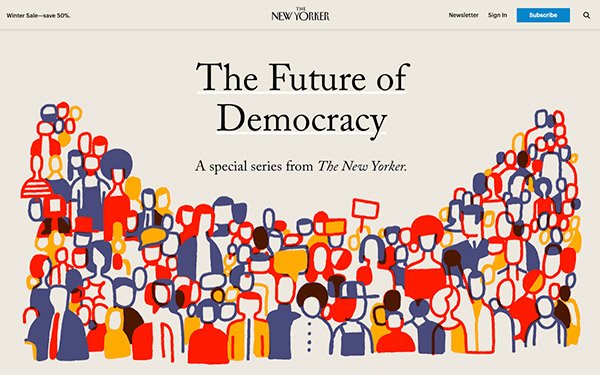 The New Yorker is combining efforts across its print and online platforms to launch a new series called “The Future of Democracy.”

The series, active through the 2020 presidential election in November, will explore the past and future of democracy in the U.S. Content appearing in the series will include articles, videos and audio broadcasts.

“Our democracy is in crisis. Many institutions of our government are dysfunctional and getting worse,” New Yorker editors write in an introduction to the series. “Although President Donald Trump, with his scant regard for the values of justice and the rule of law, is undeniably a leading actor in this crisis, it precedes him and seems certain to persist after his departure, whenever that may be.”

First up in the series in the print magazine, staff writer Jill Lepore examines the uncertainty of the future of democracy in the 1930s, due to the rise of anti-democratic, pro-authoritarian trends. Fellow staff writer Charles Bethea visits a town in North Carolina that has been without a local newspaper for the past three years for the New Yorker’s website.

Documentarian Astra Taylor also debuts work online with a piece examining the power of listening rather than speaking during political participation.

“Between now and the election in November, The New Yorker, enlisting a wide range of writers, will be exploring the past, present, and future of American democracy: tallying our problems, reckoning with their implications, and inspecting proposed solutions,” write the editors. “If the Trump era has proved anything, it is that American democracy, which has never been without profound flaws, cannot be taken for granted.”

All additions to the series will be collected on a landing page on TheNew Yorker’s website. Pieces from New Yorker writers, scholars and historians will join this first effort.
magazines, politics
Next story loading