n U.S. broadband households, adoption of OTT video subscription services has plateaued at 71%, according to the latest video trends research from Parks Associates.

Nearly two-thirds adoption is hardly shabby. Still, if the plateau part is accurate, that's a real challenge for the rapidly proliferating SVODs competing for viewer dollars. (Leichtman Research reported that a full 74% of all U.S. households had a subscription to Netflix, Amazon Prime and/or Hulu as of August 2019. Video Insider readers are encouraged to share other supporting/conflicting data.)

While Netflix's U.S. growth has slowed — perhaps supporting the plateau premise — it is currently subscribed to by half of U.S. broadband households, versus 38% for second-runner Amazon Prime Video, according to the Parks research. Will the old saw "possession is nine-tenths of the law" apply in the streaming wars? We shall soon see.

The new research also confirms that TV sets still rule. Specifically, more than half of all weekly video viewing in broadband households still takes place on TV sets. On average, consumers report spending nearly 20 hours per week watching video on TVs, compared to nearly four hours watching on mobile phones — although those viewers 18 to 24 watch as much video on computers as on TV sets (about 16 hours per week).

Broadcast TV still dominates the time spent watching on TV sets, although internet video is now close behind, judging from this chart: 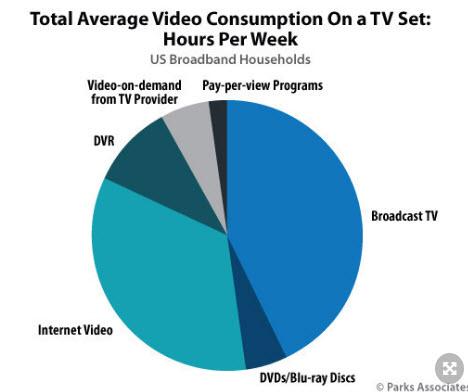 Total average per-week video (including traditional TV) consumption time was found to have increased by an impressive 33% in 2019 over 2018. (The market research firm appears to be saving the actual number of hours per week for those who purchase its “360 View: Digital Media and Connected Consumers” report.)

The power of local content is also confirmed. More than a quarter of the broadband households ranked local broadcast as the type of channels they most enjoy — “far ahead” of all other types.

However, as the report notes, while sports and local channels have long anchored traditional pay-TV packages, even this content is now moving online.

“Networks that have gone direct-to-consumer, like CBS through its CBS All Access service, recognize the value of local content to drive viewers to their online properties and make local news available on their streaming platforms,” the summary states.

“Younger video consumers represent the future of the industry, but their programming and platform preferences are distinct from older segments, which puts traditional pay-TV providers in a difficult position,” Nason adds. “Changing the traditional pay-TV service model could alienate older, high-ARPU [average revenue per user] customers, but not changing could doom future prospects."

Of course, all TV and video purveyors are up against other media as well in the battle for consumers’ time. To wit: Parks found that a fifth of broadband households are using the free version of streaming music service Pandora, and that consumers 18 to 34 spend nearly five hours per week listening to podcasts.