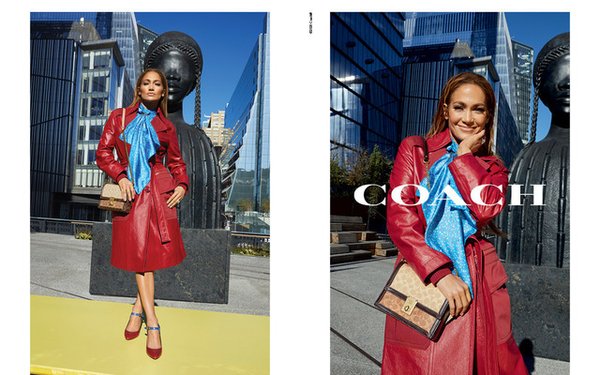 With the Super Bowl just days away, Coach is rolling out its new spring campaign, the first with Jennifer Lopez as the global face of its brands.

In addition to focusing on the singer, who is set to perform in the Pepsi Super Bowl LIV halftime show in Miami, the Coach campaign also introduces actor Michael B. Jordan as the face of its newest menswear collection.

Photographed by Juergen Teller, the ads also try to reflect the “optimistic and inclusive spirit” of New York, according to the company.

Both Lopez and Jordan appear in ads shot around the city, including the Edge at Hudson Yards. In one series, Teller shot Lopez on the High Line in front of "Brick House," a 16-foot tall bronze bust of a Black woman by the artist Simone Leigh.

The effort, which focuses on new spring bags, comes at a time when there is plenty of reason for pessimism. Sales of handbags -- especially luxury ones -- continue to plummet.

In the first eight months of 2019, the NPD Group reports that sales of women’s handbags plunged 20% from the same period in 2016. And Piper Jaffrey, in its most recent report on American teens, reports that purchases of handbags had dropped to the lowest point in the history of its decades-old survey.

Coach is bucking the trend. In its most recent quarterly results, Tapestry reports that Coach’s sales for the first quarter of its fiscal year eked out a 1% gain to $966 million, its eighth consecutive quarter of gains. And thanks to stronger sales in its international channels, especially Europe, China and Japan, global comparable store sales increased 1%, including ecommerce. Operating income for the division slipped to $200 million from $235 million in the prior year.

But comparable-store sales dropped 16% at its Kate Spade division, where it notched a $7 million loss, compared to operating income of $45 million in the comparable period of the prior year.