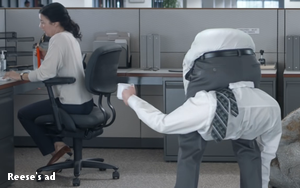 Most people expect to see weirdness in Super Bowl commercials, and this year is no exception. Naturally, there’s no shortage of celebrities either—regardless of the products being showcased in the annual sporting extravaganza.

In a first for the Coca-Cola trademark, the beverage marketer will use the big game to celebrate the launch of a new product: Coca-Cola Energy. An ad titled “Show Up” is a reference to making plans to go out but then wondering whether you have enough energy to do so.

A 15-second teaser—basically, a tight shot of a man’s face—is designed to get people guessing who will actually show up in the 60-second Super Bowl shot. (Sort of looks like Martin Scorsese, but time will tell.)

Pepsi is teaming with rapper/singer Missy Elliott and Grammy-Award winning singer/songwriter H.E.R. with a redo of the rock classic "Paint it Black" as the soundtrack to the commercial "Zero Sugar. Done Right." It opens with  H.E.R. holding a red can that transforms into matte-black Pepsi Zero Sugar container. From there, H.E.R. joins Missy in “the Pepsi Zero Sugar world,” in which everything is, yes, painted black.

Less sweet is a 30-second spot for Mountain Dew Zero Sugar in which Bryan Cranston(“Breaking Bad”) takes a swing at the role Jack Nicholson played in “The Shining.” Armed with an axe, Cranston breaks into a bathroom where actress Tracee Ellis Ross is holed up, just to hand her a bottle of the new beverage. The tagline: “As good as the original.” 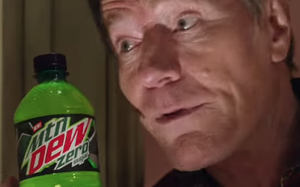 Speaking of weird, Heinz will bring to life four ads at once in 30 seconds. A 15-second clip contains teaser scenes featuring a clown, an evil family of villains, another planet and a candelabra lit by a ghost. “There’s so much to see in the four different situations that fans will want to watch again and again,” the company predicted in a release.

Moving to snacks, Snickers honors the 10th anniversary of its “You’re Not You When You’re Hungry” campaign with its sixth Super Bowl ad in the past decade. Dubbed “Snickers Fixes the World,” the new spot highlights humorous and relatable signs of a world that’s clearly not itself: grown-ups riding scooters, babies named after produce, devices that listen to your conversations and parents who text dirty photos.

Pop-Tarts will roll out its first Big Game commercial to launch what it calls its “biggest product innovation” in the form of a Pop-Tarts Pretzel. It’s the “perfect combo of sweet and salty, filled with cinnamony sugar,” as explained by television personality Jonathan Van Ness (“Queer Eye”).

The brand says it developed the new “snackable flavor” in response to research indicating expected growth in the savory snacking category.

Reese’s first-ever Super Bowl ad heralds the arrival of a candy bar no one’s heard of: Reese’s Take 5. In one of the more weirdly funny Super Bowl spots, an office worker wonders why none of her workmates knows about the new combination of chocolate, peanuts, caramel, peanut butter and pretzels.

“None of us have heard of Take 5. So who looks stupid now?” says a suited gentleman whose head is literally up his butt.