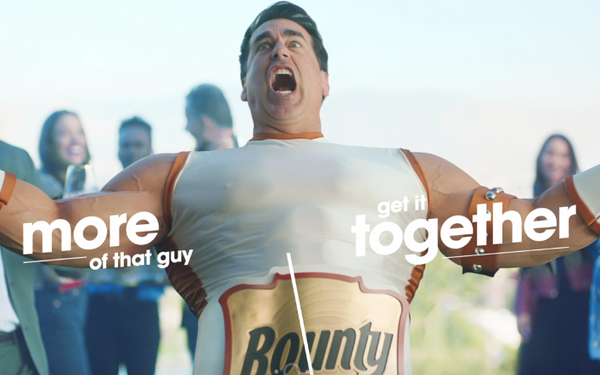 The Super Bowl is shaping a big day for decision-making, not only for bets on the outcome of the game, but in a few instances, also which specific ads viewers like best.

Procter & Gamble is using a melange of brand representatives -- from Head & Shoulder endorser Sophia Vergara to Mr. Clean, from the Charmin bear to Old Spice brand star Isaiah Mustafa -- in a one-minute interactive ad called “When We Come Together” that will let viewers guide the action by voting online.

They’re all at a swank Super Bowl party when a caterer drops a big vat of chili. As it hits the ground, viewers can decide what happens next.

The result, whatever it turns out to be will turn up in the fourth quarter.

To help “make” the ad, viewers, starting today, need to go online to watch it and make plot choices along the way. Reportedly, there are 64 different options.

Mixing brands in one ad (at least 10 characters or brand reps)  may be considered dangerous by some marketing experts But that seems unlikely in this good-natured spot that is far more funny than it is a sales tool.

The interactive element was coordinated by a company called Eko, which got a little famous with its creative interactive decisions for Netflix’s “Black Mirror: Bandersnatch” in 2018.

Bud Light is also using digital media as a voting booth for viewers. It’s putting two new ads starring rapper Post Malone for its Bud Light Seltzer online and letting viewers decide which one they want to see played in the Super Bowl.

Both, titled #Posty Store and #Posty Bar, are reminiscent of the “sperm” scene in Woody Allen’s 1972  “Everything You Ever Wanted to Know About Sex*" that depicts the brain as a control center coordinating action with other parts of the body.

In the  #PostyBar ad, we see the reaction, for example, of little red-suited men identified as Malone's taste buds as he samples a bit of mango-flavored seltzer he was served by a bartender.

In #PostyStore, Malone (and the people in his head controlling his decisions) wrestle with whether he should buy Bud Light, the beer, or Bud Light, the seltzer, from a convenience store.  (He/they seem to decide to buy both, but not before the inner turmoil of the decision causes him to wreck the store.)

“The situation that plays out in Post's head is one that many consumers might have too, but don't worry --  just like Post, you can get both Bud Light and Bud Light Seltzer too,"said Andy Goeler, Bud Light’s vice president of marketing for Bud Light.

The “winning” ad will play in the third quarter.

All of the ads would seem to be fun on their own, but the added interest in how they’ll get chosen for the game should add word-of-mouth earned media directing consumers to online sites.