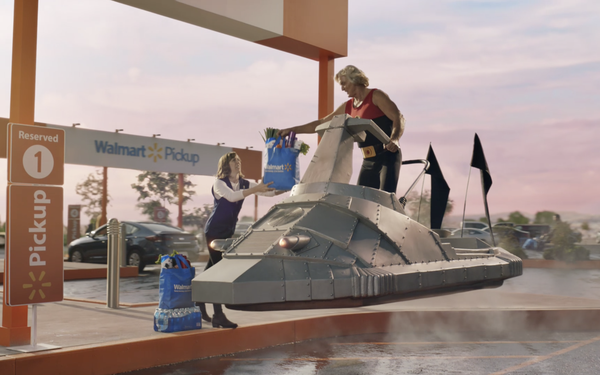 Bill from “Bill & Ted’s Excellent Adventure” jumps out from a phone booth to interact with both his past and future self.

Take a peek at the creative here.

Andy Bird, Chief Creative Officer, Publicis NY/Dept W, likens the spot’s set to that of a Hollywood production. “When C3PO and R2D2 walked on set, everyone stopped and geeked out at the same time,” he quips.

There was a tremendous amount of VFX, in a limited amount of time, he adds. “De-aging Bill’s Alex Winters, to that end, was a giant feat in itself,” says Bird. The agency’s partners at the Mill were “up against the clock” but “absolutely delivered,” he says.

Although Bird preferred to limit his comments to only address creative aspects, he says every studio approval was “exciting” largely because each of the films and characters appeal to a different audience.

The full extended cut provides context behind each visitor featured in the commercial, while the Super Bowl’s 60-second version is more tightly edited. There is also one missing visitor in the shortened version that eagle-eyed viewers may catch if they are paying attention. (Hint, he hails from the Marvel universe).