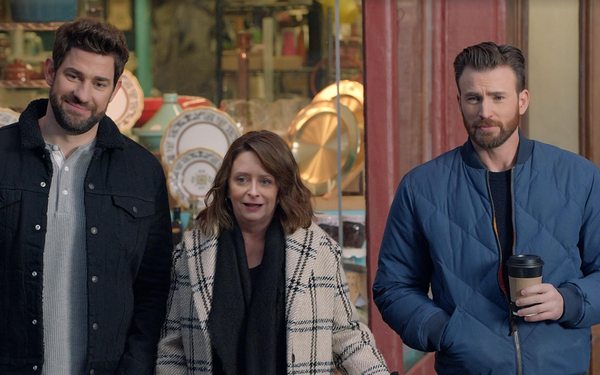 It can only be called Super Bowl Magic, and there was truly something for everyone.

The game was thrilling right up until the end. The Pepsi Halftime show sparkled and dazzled. The best ads drew plenty of laughs with beloved celebrities.

And one of President Donald J. Trump’s ads was the worst-scoring of the game, according to the USA Today’s Ad Meter. He also gave his haters on Twitter a glorious gift, revealing he might not know the difference between Missouri and Kansas.

Jeep hilariously ran away with the show with “Groundhog Day,” with Bill Murray starring in a reenactment of his 1993 classic. The ad scored first place in USA Today’s Ad Meter.

And while most of America was laughing at the way Bostonians talk, New Englanders rejoiced at Tom Brady’s appearance in “Tom Brady’s Big Announcement." The New England Patriots quarterback, whose plans for the year ahead have been the subject of constant speculation, used the Hulu spot (number 42 on the Ad Meter) to reassure his fans: “Me? I’m not going anywhere.”

Laughs gave way to weeping in Google’s “Loretta,” a tear-jerker focusing on an elderly man using Google’s assistant to help him remember his late wife. That ad ranked third.

Doritos’ “The Cool Ranch,” which pits cowboy Lil Nas X in a dance-off against the legendary Sam Elliott (and his ‘stache), came in fourth. That was followed by Rocket Mortgage’s “Comfortable,” with actor Jason Momoa cheerfully shucking off body parts.

Trump also generated plenty of social-media derision after tweeting congratulations to the Chiefs and the “great state of Kansas,” before deleting the message.

Ace Metrix’s top five, after Hyundai, were WeatherTech’s touching “Lucky Dog,” Doritos’ “The Cool Ranch,” and Microsoft’s “Be The One,” which honors Katie Sowers, the groundbreaking coach of the San Francisco team. Reese’s “Rock,” another comedy, came in fifth.

Jeep and Google also swept in a conversation of ad execs on Fishbowl, with 41% of the creatives voting naming Jeep as the best, and Google coming in second, with 31% of the vote.

Other winners include just about any ad running in the fourth quarter, since a close game meant more viewers glued to the screen. Those included Microsoft’s “Be the One,” which came in ninth in the USA Today poll, Budweiser’s “Typical American,” which came in 12th, and T-Mobile’s “Mama Tests 5G,” which came in 16th.

No word yet on the game’s ratings. Last year’s Super Bowl (with the Patriots and LA Rams facing off) drew 98.2 million viewers, the lowest in an 11-year period. But the Shakira/J.Lo halftime combo drew rave reviews from critics ranging from Vogue to Variety.