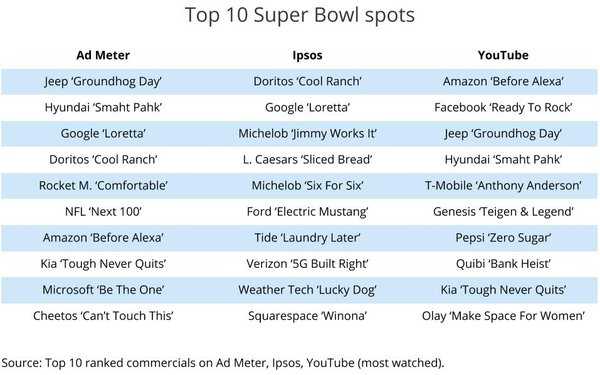 Kansas City may be the clear winner of the Super Bowl, but the winner of last night's really big game -- the Super Ad Bowl -- isn't yet clear, even as number of Monday morning statistical quarterbacks begin weighing in.

Each of those spots ranked in the top 10 of at least two of the three sources' rankings.

Campaigns that didn't fare so well included the highly covered political spots from the President and Democratic challenger Mike Bloomberg -- which failed to rank on either Ipsos or YouTube, and placed last and close to last, respectively, on Ad Meter. Bloomberg's spot ranked 60 out of 62 spots, while the President's ranked 62.