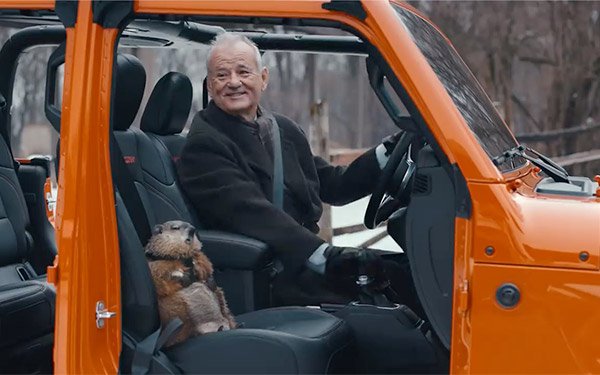 Fishbowl, a social network for professionals, gathered advertising pros to weigh in with their thoughts on this year’s crop of Super Bowl spots in real time.

The Jeep ad with Bill Murray was the winner with 41% of those polled by the network saying it was the best ad of the game. The ad featured Murray reenacting the storyline from his 1993 classic film “Groundhog Day.”

That sentiment aligned with the popular consumer vote, at least according to the USA Today poll, where the Jeep ad also placed first.

As one creative director commented on the Fishbowl site, “Jeep, so many great dots connected. Culture, celeb usage, timely with Groundhog Day,” which happened to fall on Super Bowl Sunday this year.

Google’s “Loretta” about a widower keeping his late wife’s memory alive garnered “honorable mention” status with the Fishbowl crowd, garnering 31% of the vote. Karen Costello, Chief Creative Officer at The Martin Agency, participating in Fishbowl’s live discussion during the game commented, “Google, quite simply one of the best crafted stories I’ve seen. WIN for the night so far [the ad played in the first half of the game.] Even my teenager’s cried.”

Fishbowl declared Planters’ Mr. Peanut funeral/rebirth ad the “Super Bowl 2020 brand loser,” with the ad collecting the most mentions with negative sentiment on the platform’s site. “So predictable and disappointing,” was the comment from one creative director participating in last night’s live discussion.

Amazon received a “dishonorable mention,” for its Alexa ad with Ellen De Generes and Portia De Rossi that was criticized for a perceived lack of diversity. “Dozens of bodies in the Alexa ad and only one was a person of color,” noted one commentator.

Political ads generally received a thumbs down during the discussion, the sentiment being that such ads put a damper on the national party that the game engenders.  As one participant noted, “We need a break from politics.”

There was also sentiment that feminism took a hit this year in the game ads while the reaction to various “mashups” was mixed, with some saying they made ads seem too “busy” or confusing pointing to the Bud Light-Tide crossover ad as an example.

More of the commentary from the Fishbowl discussion can be accessed here.