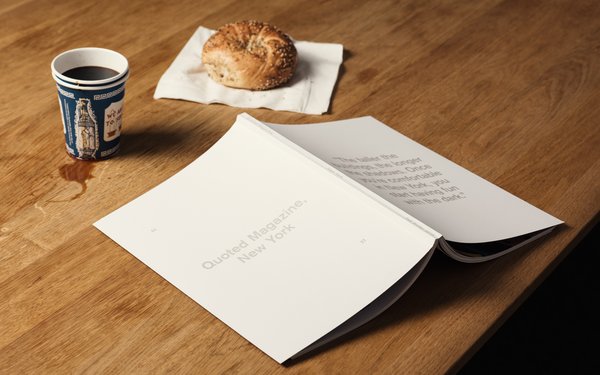 There are a few occasions when all it takes is ambition, hard work and the right connections to transform a dream into reality. Although Norwegian TV personality Rolf Arne Leer launched his “love letter” to New York City three years ago, the awareness and acceptance of his Quoted magazine is recently gaining traction, particularly among New York City influencers and advertisers thanks to his associations with the advertising community.

The print-only “for influencers by influencers” platform serves as Gen Z’s iteration of cult trend-setting magazines Nylon or Paper. Each issue features NYers expressing their hopes, dreams and aspirations.  “We all have our truth, and I've always been fascinated by the diversity of New York and all the stories that hide behind closed doors,” says Leer. “Quoted Magazine has one simple philosophy: free your truth."

The magazine comes out four times a year, with the most recent edition featuring ads from lifestyle brands such as Happy Socks, John Frieda, Mucker activism-wear and Puerto Rico Coffee.

StrawberryFrog’s founder Scott Goodson was recently asked to sit on Quoted’s board of directors, using his talents and connections to help raise awareness for the publication. StrawberryFrog also placed an ad in the most recent issue.

“They want to identify a select group of brands who understand the power of influencers in NYC on the city culture, but also the national culture,” says Goodson. “I’m a sucker for a beautifully designed printed magazine. It just feels and looks so extraordinary.”

Quoted is available via several magazine shops, but one innovative distribution channel is via “hip” hotels. “It was a hustle all the way to get the first partners to say yes to have it as an in-room magazine,” says Leer. “Once the magazine got launched, we’ve had an incredible response I must say, as it is disruptive compared to many other magazines.”

The magazine’s circulation stands at 350,000. It aims to bring back the printed magazine to a new generation looking for the “cool factor of genuine magazines rather than just staring at their phones,” says Leer.

Still, advertisers aren’t merely satisfied with a print ad, which is why Quoted has more recently branched out into branded sponsored events. Each experience invites 150+ select New York influencers. “Our original and unique network of these influencers believe in our values,” says Leer. “We curate for those brands and companies that wish to get their products into the hands and to the lips of these culture-makers.”

Leer admits it can be “brutal” to attempt to launch a new magazine in today’s digital world, particularly in New York. There is a lot of “persistency” to get through the clutter, both with distribution and brand partners, he says. Still, he has hope, since brands and readers both seem to “love the feel and smell of an old school beautifully designed magazine in their hands,” he believes. “That's incredible to watch.”

In addition to building the New York franchise, Quoted will introduce an Oslo-specific issue. “Once we establish Quoted here, we will look at other cities,” says Leer. “We’ve already been approached by publishers who want to buy a franchise from us but we are not making any moves until we grow New York into the new Interview magazine, the culture defining magazine for the next decade.”