What Is Your Personal Data's Share Of Media Spending? 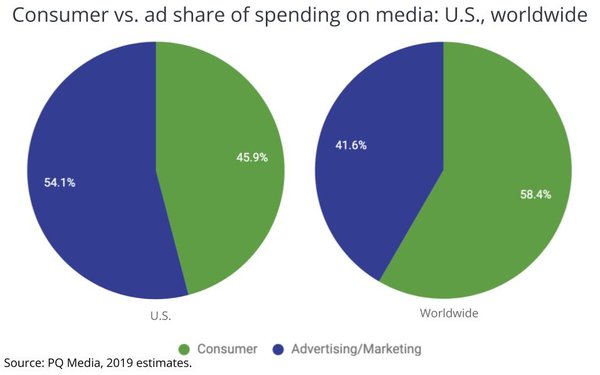 After years of erosion, ad industry spending is beginning to gain share vs. the money consumers pay directly for media, especially in the U.S.

On Friday, we reported on the release of PQ Media’s 2019 consumer media spending estimates, showing that they lagged advertising growth last year. But the U.S. data shows an even more pronounced shift toward ad-supported media.

While the ad industry’s share of global media spending rose just one-tenth of a percentage point last year, in the U.S. it expanded 3.7%.

Moreover, while consumer spending is the more dominant part of the mix worldwide, the ad industry is the dominant source of media spending in the U.S.

The trend is significant for a number of reasons, especially that it signals vitality of advertising as the underlying business model for media. The truth is, there are a variety of newer and emerging models underneath that, including many new forms of media, as well as indirect spending models like native, branded entertainment and product placement, etc.

Conversely, there are some newer and indirect -- and I would argue, somewhat still intangible -- forms of media funding on the consumer side of the ledger that likely are not yet being properly accounted for.

Specifically, many new media models -- especially those of the digital platforms -- now monetize consumers’ data as a form of payment and a proxy for enabling advertisers to target them move effectively in an identity-based and increasingly cookie-less digital marketing world.

I don’t think anyone has put really good numbers around this payment model, and it most likely is not straight line math, but I’m going to guess it’s well into the billions. Underneath that, there are actually newer models that pay consumers explicitly for their data, identity and right to be advertised to. They come in many forms, but in their most explicit variants they fall under a new category within the ad industry that some are calling “rewarded opt-in advertising,” in which consumers are paid explicitly for the right to be targeted and/or advertised to.

Sometimes those payments are for explicit monetary value, but more often than not, they are a form of barter in which the consumer consents to being advertised to in exchange for access to media or some form of media services.

Arguably, all of the major free, ad-supported digital platforms -- Google’s entire suite, Facebook, and many dedicated apps -- utilize this model.

And arguably, on a broader basis, all ad-supported media has used that model: ie. giving people access to free or highly subsidized media content in exchange for being exposed to ads. The difference between the historic “borrowed interest” model and today’s far more explicit identity-based targeting model, is that people’s explicit data is being traded like derivatives.

I’ve been working on my own back-of-the-envelope analysis of these models, and I’m still a little stuck, so if you’ve got some ideas -- and/or data -- for how to properly put some dimensions on this, what I’m hoping to achieve is a really good benchmark for the portion of media that is paid for or underwritten by people trading their own data vs. the portions that are paid for explicitly by advertising or people paying money for it.

As always, you can leave a comment here or reach me at joe@mediapost.com.