Founders Would Have Deemed Pace Of News Unprecedented: Un-President-ed, Too 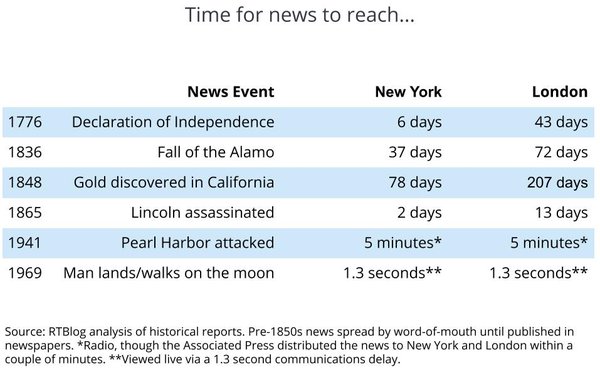 On this Presidents' Day, I'd like you to think about how the speed of media has changed since our first President, and what implications that holds for a republic that relies on informed citizens.

As America spread across the frontier from the original continental states, the dissemination of news actually slowed down with geography.

It took 78 days for news about the discovery of gold in California to reach New York, and 207 days to reach London.

The invention of the telegraph and the laying of undersea cables in the 1850s accelerated the spread of news, but it still took two days for news about Lincoln's assassination to get published in New York, and 13 days in London.

Broadcast media dramatically closed the gap in the 20th century, enabling news about the Japanese attack on Pearl Harbor to be spread in minutes By the 1960s, satellite communications enabled the entire world to watch man land and walk on the moon in near-real-time, albeit with a 1.3-second communication delay.

Today, major news events now seem to spread before they even happen -- or even if they do not happen.

The speed of information access is worth remembering on this Presidents' Day, because I don't think it was something our founders accounted for, especially as we head into one of the most consequential election years since we were founded.