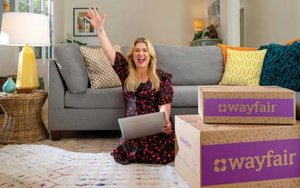 The company is also slashing its workforce, laying off 550 employees -- about 3% of its workforce -- as it tries to wrestle with rising costs.

The Boston-based e-tailer says Clarkson, also well known as a TV host and as a coach on “The Voice,” is set to appear in its new “Home: You Got This” campaign. The ads are scheduled to break next week.

A spokesperson for Wayfair tells Marketing Daily the ads were created in-house.

Wayfair says Clarkson is its first official brand ambassador in the U.S., and the effort spans TV, digital and retail, aiming to help customers shop confidently while exploring unlimited possibilities.

Clarkson is also set to appear in digital and social channels, as well as integrations on NBCUniversal’s “The Kelly Clarkson Show.”

In April, Wayfair plans to release a collection of furniture and décor inspired by Clarkson’s southern roots.

The announcement comes just days after Wayfair announced the layoffs.

“Workforce reduction in a growth-focused company is typically not a good sign,” writes Deutsche Bank in its reaction to the layoffs, noting that investors are also increasingly fretful about impact from coronavirus-related manufacturing/shipping issues in China, driving share prices lower. Deutsche Bank continues to rate the company as a “buy.”

Wayfair is set to announce its quarterly earnings next week. In its last quarterly report, revenues surged 36% to $2.3 billion, and the number of active customers rose 37% to 19.1 million. But its losses mushroomed to $272 million, up from $151.7 million in the comparable period.