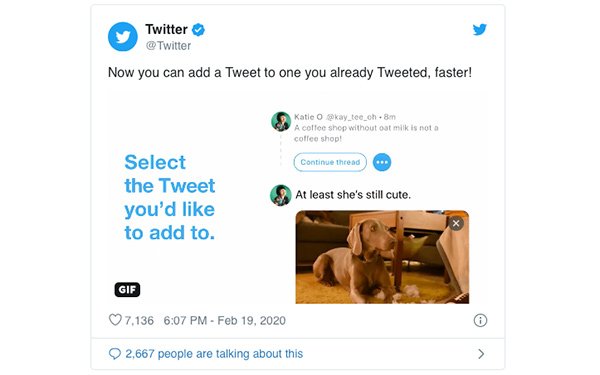 Although an edit button is still nowhere in sight, Twitter is giving users another way to control their tweets.

As its name implies, a new “Continue Thread” button lets tweeters attach additional thoughts to existing tweets. This should make it easier for users and their followers to put new comments into the proper context, as well as understand their connection to older tweets.

Twitter users have always had the ability to tweet out “threads,” i.e., a series of tweets connected by a common thought or theme. With the new button, tweeters can now return to a thread and expand on its subject matter.

Long criticized for its complex interface, Twitter has spent years trying to simplify its app, and make it easier for users to control their communications. Most recently, the company added emojis to its Direct Messages feature. Per the change, messaging users now receive a notification whenever a new reaction is added, which has the potential of continuing conversations and adding emotional layers to exchanges.

As with previous changes, users saw news of the “Continue Thread” button as a chance to petition Twitter for an edit button. “All this, but we can’t get an edit button for when we make a typo,” one user complained.

Twitter’s opposition to an edit button has apparently evolved over the years.

“The reason there hasn’t been an edit button traditionally is we started as an SMS service [and] we wanted to preserve that vibe and that feeling in the early days,” Dorsey said.

“But now … there are some issues with edit,” Dorsey added. “One is, you might send a tweet, and then someone might retweet that, and then an hour later, you completely change the contents of that tweet. And the person that retweeted the original tweet is now retweeting and rebroadcasting something completely different.”

Despite some unsatisfied users, Twitter appears to be a healthy business. During the quarter ended December 31, Twitter said average monetizable daily active users reached 152 million, which was up 21%, year-over-year.

Dorsey attributed much of that growth to product improvements designed to “increase relevance and ease of use” for users.
apps, social media, twitter
Next story loading