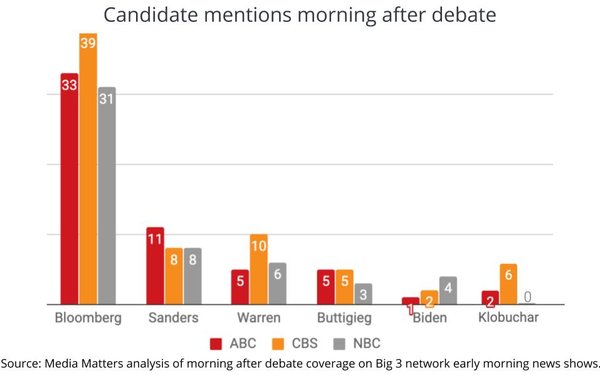 The TV news pundits skewered Mike Bloomberg's performance during Wednesday's Democratic Presidential debate in Nevada, but that's who they were talking about the next morning on the major broadcast network early morning news shows.

That's the finding of an analysis released today by Media Matters, which calculated the number of mentions of each Democratic candidate on the Big 3 morning news shows: ABC's "Good Morning America," "CBS This Morning," and NBC's "Today."

While Bloomberg took some major hits from his Democratic rivals piling on during his debate debut, there's a rule of thumb in marketing that essentially goes -- Say what you want, just spell my name right -- meaning that gross impressions may count more than necessarily reaping positive sentiment.