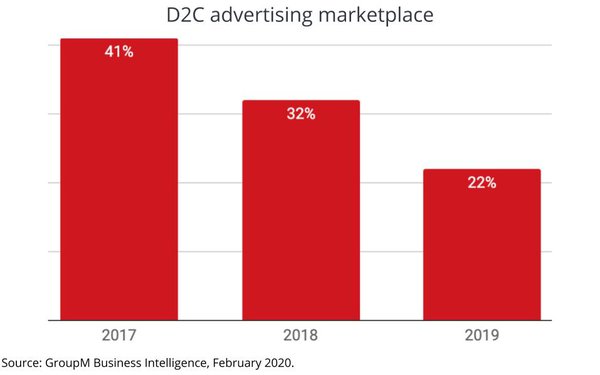 To the benefit of Facebook and other partners, the demise of direct-to-consumer (DTC) businesses has been greatly exaggerated.

That’s according to a new report from Brian Wieser, global president of business intelligence at GroupM.

“Negative trends about DTC businesses are trending in the news as of late, but related companies continue to grow on a relatively small base of business,” Wieser assures in the report.

Critics have recently had good reason to suspect the DTC model was in jeopardy.

“The reality of DTC is … not quite so negative in terms of underlying trends,” Wieser reasons, although he and his team did find that sector growth is slowing.

“We can crudely estimate growth has generally slowed as these companies have matured,” according to Wieser.

Wieser estimates total spending on advertising by GroupM’s narrow definition of DTC companies is probably in the single digits of billions of dollars.

Yet, scrolling through any Instagram feed will show just how closely social media and DTC brands are connected.

At least among publicly-traded DTC companies (including Casper, Hello Fresh, Blue Apron, and others), the report suggests advertising as a percentage of revenue is relatively high.

Partly as a result, “the emergence of DTC is still going to have a big impact on the broader marketing industry,” Wieser said.

GroupM defines DTC companies as ones that primarily manufacture own their own brands; those that primarily sell through a self-branded ecommerce site with physical retail or third-party ecommerce as secondary channels; not primarily an operator of a marketplace; not primarily a provider of services; founded at some point in the past 10 years; not a multi-level marketer; and not a business unit of a larger company.
advertising, dtc, ecommerce, small business, social media
Next story loading