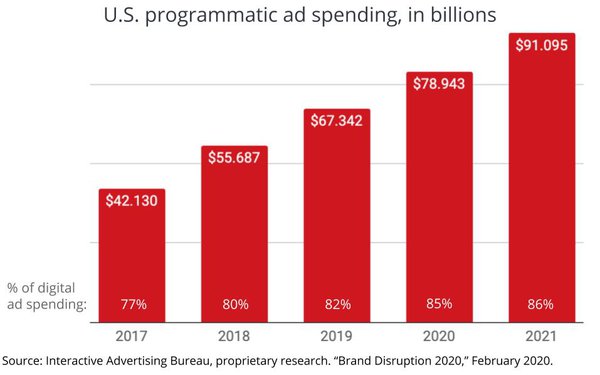 Programmatic media buys now account for 85% of all digital ad spending, according to estimates released in a new report from the Interactive Advertising Bureau.

The finding is important, because the IAB to date has eschewed official estimates for programmatic in its regular ongoing tracking of digital advertising spending in its quarterly Internet Ad Revenue Report.

The estimates, which are contained in the IAB’s “Brand Disruption 2020” report released this afternoon, put U.S. programmatic ad spending at nearly $79 billion, an increase of 87% from 2017, the first year benchmarked in the report. The IAB

The IAB projects U.S. programmatic ad spending will rise to 15% to $90.1 billion in 2021. An IAB spokesperson said the estimates it published in the report are derived from Zenith's Programmatic Marketing Forecasts, 2019.

The report doesn’t focus on programmatic advertising, per se, but says its growth has been driven by a corresponding rise in data enabling programmatic buys (see below).