'Trust' Reaches A High For All TV News Brands, Except One 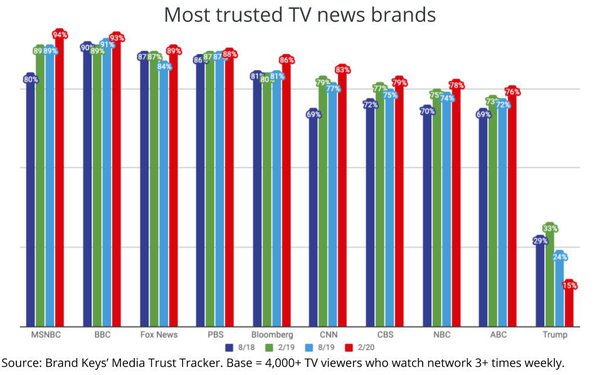 In the aftermath of the presidential impeachment, all of America's leading TV news brands have reached their highest measure of trust since Brand Keys began tracking it for MediaPost in the summer of 2018. Except one.

As in the previous three semi-annual tracking studies, Brand Keys included the President in the survey asking thousands of Americans to rate how their trust influences their perception of a news brand. The President's fell to its lowest level yet, with just 15% of respondents identifying "trust" as a value they associate with his brand.

"We suspect a lot of the lift was due to the impeachment coverage," speculates Brand Keys Founder and President Robert Passikoff.

"We are able to measure any variable (brand, product, person, etc.) in the same way we measure the news brands, so we’ve been measuring 'President Trump' in each wave, but in this case we balance not for viewership but voter registration," he explained about how Brand Keys compared the President's trust to that of the major network TV news brands.
"Ultimately, in the instances of these surveys, we are “extracting” one value – trust – and calculating it’s percent-contribution to engagement. In the case of news engagement is viewership. In the case of Trump, it’s his performance as President, as that’s the context in which it’s presented."

1 comment about "'Trust' Reaches A High For All TV News Brands, Except One".
Check to receive email when comments are posted.
Next story loading