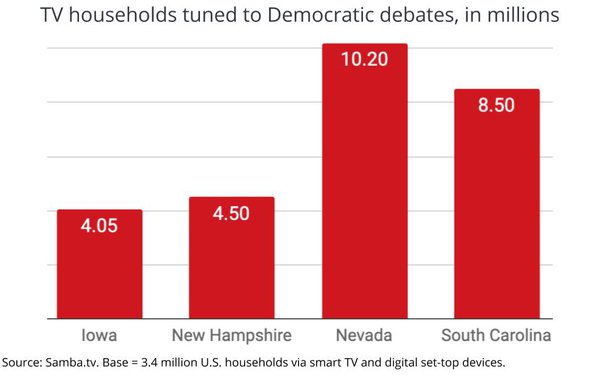 CBS' telecast of the Democratic debate in Charleston, SC, Tuesday night declined 17% from NBC/MSNBC's telecast of the Feb. 19 New Hampshire debate in terms of the number of U.S. TV households tuning into it, according to overnight estimates from Samba TV.

Charleston, however, was up 25% compared with the average 6.81 million households that have tuned into the four Democratic primary/caucus debates to date.

Samba TV analysts attributed the spike in Nevada debate ratings, as well as the sustained interest in South Carolina's, to he appearance of billionaire Mike Bloomberg in both.

“The Bloomberg effect continued to draw strong audience numbers in last night’s debate as more than 8 million households tuned-in to see the former mayor come back from last week’s performance and see Senator Sander’s performance under the scrutiny of front runner status,”  said Jeffrey Silverman, director of data science & analytics at Samba TV. “South Carolina voters are clearly paying close attention to the candidates ahead of the State’s primary as viewership in the Palmetto State over-indexed the national average by nearly 40%. At the same time, it appears a number of voters in several of the biggest Super Tuesday states opted not to watch the Tuesday debate with California viewership in particular significantly under-indexing the national average.”