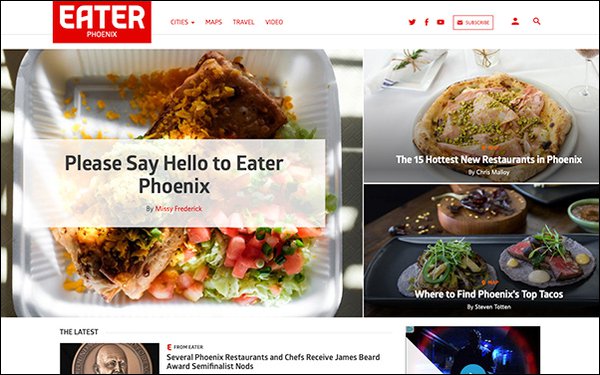 has launched Eater Phoenix and is expanding its Eater Charleston edition into Eater Carolinas.

The publication now has sites dedicated to 25 markets across America, Europe and Canada.

Eater Phoenix is the first new site since the publisher launched Eater London in 2017.

“Phoenix’s growing population, diverse and evolving restaurant scene, and reputation as a tourist attraction all made it an appealing city to explore further in our coverage,” writes Eater editor Missy Frederick.

Under the direction of longtime Eater editor Erin Perkins, the Eater Charleston site has already expanded its reach to North Carolina cities like Raleigh and Charlotte.

"We’ve long wanted to expand our reach deeper into the region and have tested the waters with guides and news coverage in Asheville, Durham and beyond,” Amanda Kludt, editor in chief of Eater, told Publishers Daily.

“Those stories have resonated strongly with our audience, and we've received numerous requests to launch a North Carolina site, so we decided to commit to the entire region.”

Coverage of Savannah, Georgia, will also be included in Eater Carolinas, Kludt said, though “this might be considered cheating by some.”