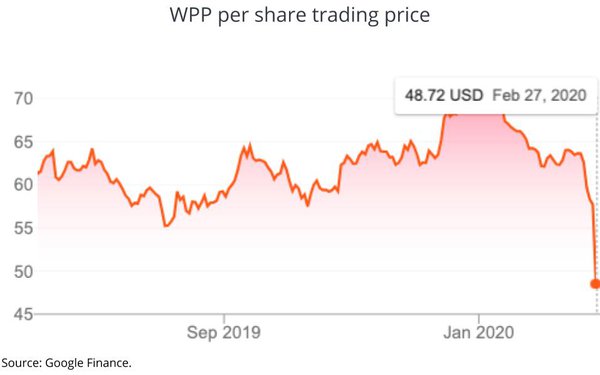 WPP shares tumbled 17% today after reporting an organic revenue drop of 1.6% for full-year 2019 and a 1.2% decline including Kantar. (The company sold a 60% stake in Kantar to Bain Capital in December.)

The sharp drop came amid the continuing sell-off of shares globally due to concerns about the Coronavirus crisis. Omnicom, Interpublic, Publicis Groupe and MDC Partners shares were all down single digits in morning trading today.

North America operations continue as the biggest drag on the holding company’s results, posting a 5.7% organic revenue drop, while other regions reported low single digit increases. The U.S. accounts for about a third of WPP's business.

WPP CEO Mark Read described 2019 as a “foundational year” in the company’s three-year turnaround plan and that it was “on track” to deliver 2021 targets including organic growth in line with its competitive set. 2019, he added, was “broadly in line with what we expected.”

Growth has been hampered in part by client losses in 2018 and 2019, notably a large piece of Ford business. Read said the company will cycle through the revenue hit on Ford by the end of the first quarter of this year.

But organizational miscues have also hurt the company, Read said, citing the consolidation of U.S. healthcare businesses a few years back that led to a talent exodus and poorer performance. That consolidation has now been undone.

The company expects 2020 to be a flat year, both for revenue and operating profits, although that guidance was offered with a caution that it could change given the impact of the Coronavirus crisis—impact that is impossible to predict at this point. He noted that some WPP workers in China are starting to resume work back at their offices.

2020 priorities include continuing to invest in client and new business teams and more new creative talent. Read made a point of noting that most of the struggling units are traditional creative agencies.

The firm is also working to better connect its technology platforms via a project that’s been dubbed WPP Open, which should foster greater collaboration within the company and create additional opportunities for clients, Read said.

The company is also focused on tackling duplication and inefficiency in back office operations.

As to what he described as the “Cookie Apocalypse,” Read said WPP is less exposed with only about £2 billion of its £53 billion in billings earmarked for programmatic buys, which are heavily dependent on cookie trails. Scale, relationships with premium channels, data and insights all help to mitigate challenges in a cookie-less world he said.

But, he added fewer cookies “reduces the value of data generally … it’s tougher of intermediaries without third party relationships.”

Read also noted that Google is building “functionality” into its Chrome browser designed to help marketers off-set the impact of cookies going away.