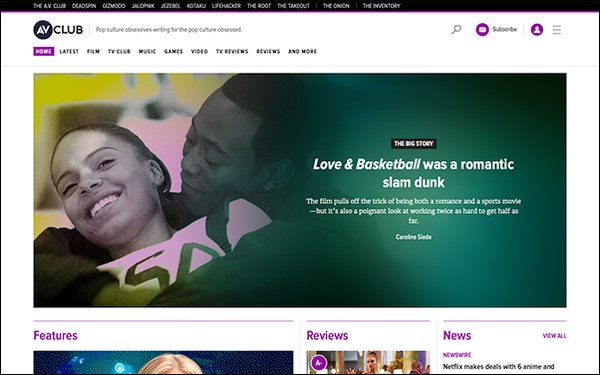 G/O Media entertainment and pop-culture site The A.V. Club unveiled an updated look and format for its homepage today.

More stories are now on display in a single frame, with fewer ads and a 20% faster loading speed from the previous iteration.

"Our main goal with this redesign was creating a better user experience," A.V. Club editor in chief Patrick Gomez told Publishers Daily. "On the editorial side, I know our readers will appreciate the increased content-to-ad ratio. And our sales team is excited to take advantage of the more premium placements, preferred dimensions and increased capabilities the redesign accommodates," he said.

Gomez added: "As editor-in-chief, my main concern is keeping our readers engaged, but G/O Media as a whole sees this as a win for both readers and advertisers."

The A.V. Club redesign was created by the site’s in-house team of design and web staff.

Features and big stories are now displayed in a bold, widescreen format at the top of the homepage.

“This marquee feature space will emerge at the top of the homepage throughout the week when we’ve got something particularly special to share,” Gomez wrote in a post introducing the new homepage to readers.

This solves the previous problem of feature stories getting pushed from the homepage too soon, when new stories were published.

Underneath the feature story, the new format displays more stories in one frame, which will get updated and curated more frequently than before. Previously, the homepage displayed stories in reverse chronological order.

That still exists, but now the latest stories are organized by most recent in the “Latest” section in the navigation bar. (That link previously took readers to the homepage.)

The top navigation bar remains the same, but some sections’ feature stories are also now on the homepage.

Special sections to round up coverage of big pop -ulture moments will also appear on the navigation bar throughout the year, such as an upcoming James Bond section to prepare for the new movie "No Time To Die," due out in April, Gomez wrote.