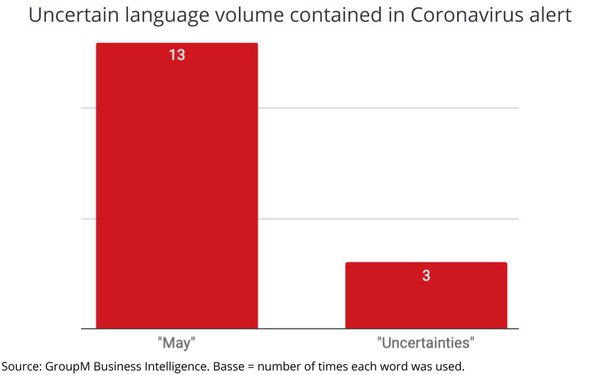 There's a tremendous amount of uncertainty in a just-released alert on the impact the Coronavirus may have on the advertising industry from GroupM's Business Intelligence unit, including the language it uses to qualify it.

The 1,527-word report uses the word "may" 13 times and the word "uncertainties" three times to explain how the virus could impact various aspects of the ad business, including both consequences and opportunities, as well as mega events like the Tokyo Sumer Olympic Games.

Generally speaking, uncertainty does not bode well when it comes to advertisers committing -- or canceling -- advertising budgets.

"Marketers often cut spending because of uncertainties around consumers buying products," GroupM Business Intelligence Global President Brian Wieser writes in the report, continuing: "if those products could even be made available: e-commerce-based delivery was often challenged because of limited availability of drivers and supply chain issues that impacted all forms of manufacturing and retail sales."
As concerns about the impact of a global pandemic have grown, industry speculation has been raised about everything from the ad industry's upcoming annual Mecca in Cannes, France to the potential of network TV upfront cancellation options.
On Saturday, France's Ministry of Health banned public gatherings of 5,000 people or more. The 2020 Cannes Lions festival doesn't take place until June, but the event's organizers already have added a Coronavirus notice at the top of its home page noting their "priority at this time is the safety of our delegates," and that it will closely monitor the situation.

In terms of 2019-20 network upfront advertising deals, the networks are keeping an eye on third-quarter cancellation options, where advertisers have the option to cancel as much as 50% of their upfront ad buys. Normally, those options need to be exercised 60 days before the beginning of the quarter.

"If the volume of available budgets for spending on advertising weakens in any given country, it is difficult to anticipate which specific media will be most impacted," GroupM's Wieser writes in the agency's alert, referring mainly to China.

"It does seem safe to say that the aforementioned supply chain issues with China -- and the timing with which Chinese manufacturing returns back to normal -- will disproportionately impact global media owners whose ad revenues depend on Chinese manufacturers," he continues, adding that certain media could actually benefit from lifestyle changes associated with a public health concern, especially TV.

"Traditional television could fare relatively better because of the likely improvements in audience levels, while outdoor advertising may be worse off with lower levels of foot traffic in many places," he writes, adding: "At the same, time we emphasize that spending on paid media will not necessarily correlate with spending by marketers on services, such as those provided by agencies."