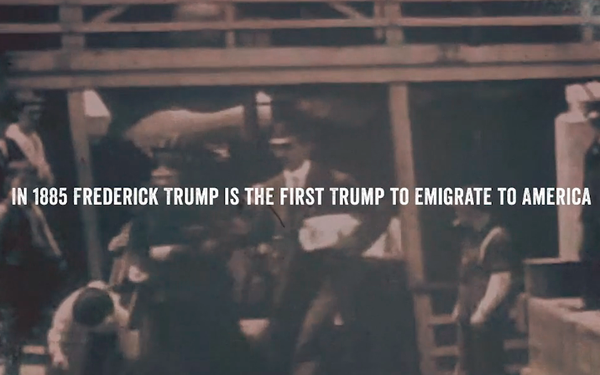 Luxury tequila brand Escudo Águila Real (EAR) is introducing its first major marketing push in the U.S. by taunting Trump over the fact that tequila has been in the country longer than his family.

The creative, developed with multicultural shop Upstreamers, rolls black-and-white images from yesteryear as messages across the screen point out tequila’s timeline in American history. Mexico exported the beverage to the U.S. beginning in 1884.

The ad then notes that Frederick Trump was the first immigrant in Trump’s family to arrive in America in 1885. The end is a reminder that  “The taste of Mexico has been in America longer than many things,” before offering up a toast.

Upstreamer co-founder Bryan Garcia recognizes wading into political messaging may alienate some potential drinkers, but is “confident” the intended target will identify and connect emotionally with the campaign.

“The client’s challenge and brief to us was simple: to celebrate the brand’s Mexican-American heritage and make its core Mexican-American target audience feel proud of their cultural duality,” he says.

It’s no secret that Trump has repeatedly tarred Mexicans unfairly over the years with racist labels to appeal to his political base.

Part of EAR’s strategy is to cut through the cluttered and competitive market, particularly since most established premium tequila brands are owned by the largest spirits companies in the world. “This campaign was designed to be a social media-focused effort,” Garcia says. Trolling Trump tends to elicit heightened resonance (both good and bad) across those platforms without the hefty media spend.

This marks Upstreamer's first work for the brand since it landed AOR duties for the account last month.

Since its inception nearly 10 years ago, EAR’s owner has bypassed traditional advertising to focus more on building its distribution footprint and on conducting hyper-local experiential marketing activations, such as tastings.