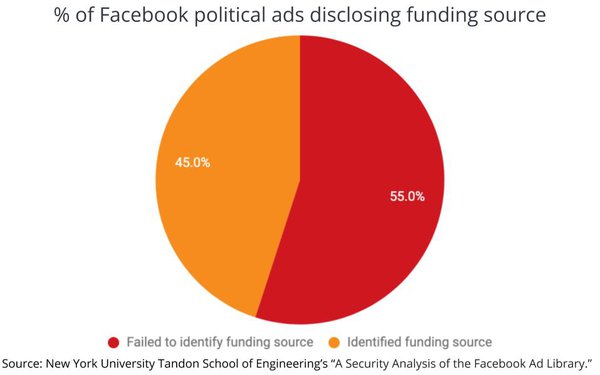 An exhaustive study conducted by academic researchers at New York University's Tandon School of Engineering found "systemic flaws" in Facebook's political advertising monitoring and enforcement, with many of the worst offenders exhibiting the same disinformation and non-disclosure issues that Russia's Internet Research Agency used to disrupt the 2016 U.S. presidential election.

The study, "A Security Analysis of the Facebook Ad Library," examined a year's worth of political ads appearing on Facebook through April 2019, and found that 55% failed to comply with Facebook's most basic policies for disclosing their funding sources.

Even more alarming, the researchers found that many of the ads were "placed by likely inauthentic advertisers, often using disinformation tactics similar to those employed by the Russian-backed Internet Research Agency.

"These tactics included targeting readers by race, gender, union membership, or veteran status – identity markers well known to be highly effective in organically spreading messages."
The study identified 19,526 ads worth at least $3.86 million placed by such "inauthentic communities," and that just as in 2016, when Facebook users engaged with these ads their data was collected for future political retargeting.

The researchers also found that when Facebook discovered such inauthentic political ad operatives, it took them an average of 210 days to shut them down.