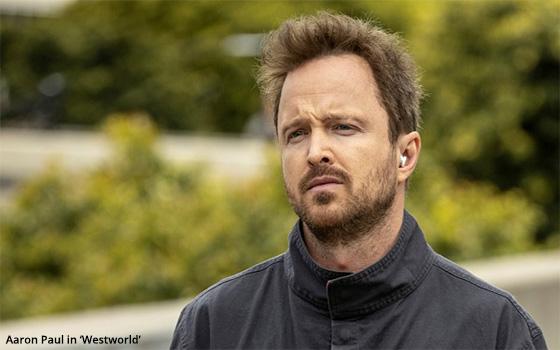 A common theme connects the many near-future sci-fi dramas that have turned up on TV in recent years.

The theme is: The highly technological world just a few years distant from our own is almost never a happy place.

Instead, the point of view of these shows is virtually unanimous in the belief that the high-tech revolution will make our lives worse, not better.

The benefits of technological advancements are rarely delineated, much less celebrated. On the contrary, according to these shows, our wholly interconnected, high-tech world will be characterized by alienation, cruelty, violence and complex systems -- which we humans made -- that will malfunction and run amok in ways beyond our control.

HBO’s “Westworld” has long been the best example of this kind of near-future, sci-fi TV, and it continues to be in its third season which starts this coming Sunday night -- nearly two years since Season Two ended.

The third-season premiere is a creepy, chic four-star thriller. This show is nothing if not stylish. It is a wonder to behold.

Somehow, the makers of “Westworld” have succeeded in scouting the most futuristic architectural locations on the planet Earth, and using them to create a world of the near future that we in the present day have no problem recognizing as a slightly tweaked version of our own.

There is even a scene in which a new character played by Aaron Paul (pictured above) is seen on the phone with a customer service representative who sounds like a real person until the character realizes the voice on the phone is not human.

“None of this is real,” says one character to another at a tech industry awards banquet in the season premiere. “We're living in a simulation.” And so we are.

Season Three will apparently deal with the aftermath of the bloody revolt of the lifelike Westworld robots that transpired in Season Two.

For the corporation that ran the Westworld “park,” the bloody massacre is treated in the third-season premiere like a p.r. challenge.

“Robots don’t kill people, people kill people,” says the company's interim CEO dismissively, at a board meeting where it is decided that the park should be reopened.

As it happens, Episode One of the new season goes nowhere near Westworld itself, but concerns itself instead with certain characters who are now in various states of exile.

In the episode, a handful of the lifelike automatons are commingling with the general population, like the pod people in “Invasion of the Body Snatchers.” They might have designs on taking over in the manner of the pod people too, led by the robot known as Dolores, who is played with cold efficiency by Evan Rachel Wood.

“Westworld” has only been around since 2016, but it feels older, perhaps because it is one of the last shows on HBO that is still here that was developed under the old regime before AT&T took over and remade the Time Warner TV networks into WarnerMedia.

The people who ran HBO back then had a great flare for this sort of thing. Like so many of the shows they nurtured, going back at least to “The Sopranos,” “Westworld” has a spare-no-expense kind of feel to it -- from the settings to the vehicles to the on-screen graphics. No wonder it took almost two years to bring it back.

television
1 comment about "Future Is Bleak In TV's Near-Future Sci-Fi Dramas".
Check to receive email when comments are posted.
Next story loading