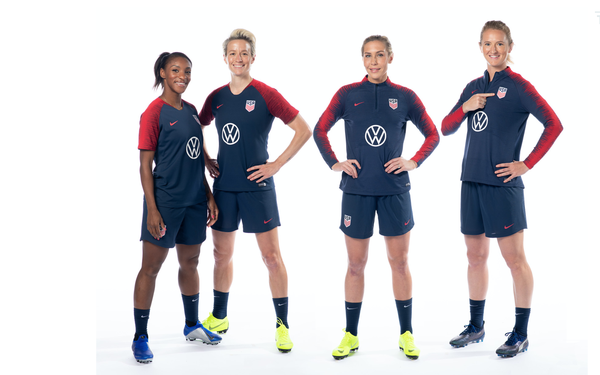 Volkswagen of America is the latest sponsor to react negatively to a legal filing by the U.S. Soccer Federation.

The filing states that a “higher level of skill” and “more responsibility” are required of members of the men’s national team than the women’s team.

The statements were part of a response by U.S. Soccer opposing the motion for a partial summary judgment in a case related to the Equal Pay Act brought by the World Cup champion U.S. Women’s National Team.

“We at Volkswagen of America are disgusted by positions taken by U.S. Soccer and they are simply unacceptable,” according to the statement from VW issued Thursday. “We place great emphasis on gender inclusivity and equality and require our partners do the same. We stand by the USWNT and the ideals they represent for the world. We demand that U.S. Soccer rise up to these values.”

In January 2019, VW became the presenting sponsor of U.S. Soccer. The four-year deal supports the U.S. men’s, women’s and all youth national teams as they train and compete on the world stage.

VW has been trying to get more women coaches into the game at all levels. While 47% of youth soccer players are women, only 15% of coaches are female, according to the automaker. Beyond those programs, Volkswagen is working with U.S. Soccer on raising the game’s visibility, player and coach development, and promoting greater fan engagement across the country.

U.S. Soccer’s president Carlos Cordeiro issued a statement attempting to smooth relationships. “On behalf of U.S. Soccer, I sincerely apologize for the offense and pain caused by language in this week’s court filing, which did not reflect the values of our federation or our tremendous admiration of our Women’s National Team,” Cordeiro said. “Even as we continue to defend the federation in court, we are making immediate changes.”

Cordiero said he has asked Latham & Watkins, a law firm known for being pro-women, to guide legal strategy going forward. The firm boasts a Women Enriching Business committee that focuses on addressing the business challenges of women lawyers and current and prospective women clients.

“I have made it clear to our legal team that even as we debate facts and figures in the course of this case, we must do so with the utmost respect not only for our Women’s National Team players, but for all female athletes around the world,” noted Cordiero.