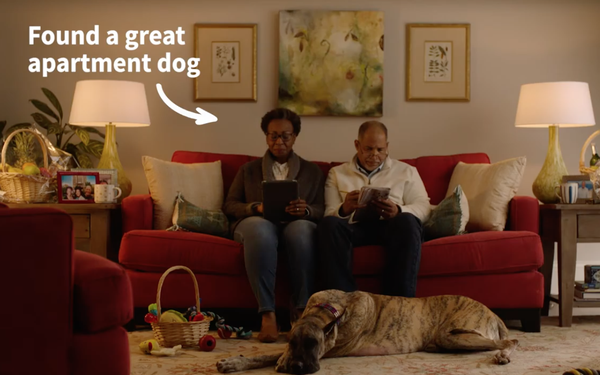 The effort aims to reshape the image that AKC is just for “show dogs” and demonstrate the inclusivity of the organization.

Themed “If It Barks, It’s AKC,” the effort was developed with digital marketing agency Media Cause. The digital videos were shot by director Dan DeLorenzo and Search & Destroy films.

The campaign is set to run across over-the-top channels like HULU, digital outlets, print media, social media, audio and streaming channels through the end of the year.

The 135-year-old organization recognizes it needs to build consumer awareness that it supports dogs acquired not only through breeders, but also adoptions via rescue groups and shelters, says Kirsten Bahlke, the AKC’s vice present of consumer demand. The organization supports all canine companions, whether they are “wonderfully purebred or perfectly mixed.”

“We’re here for their entire dog-owning journey, no matter where it starts,” Bahlke says in a release. “When thinking about how to connect with a broader audience of dog owners, we did the research to identify where they tend to need the most help.”

Overall, people seem to struggle in a few prominent areas, she says. First, is figuring out what kind of dog is right for their lifestyle, not just deciding based on what’s cute, but based on each breed’s unique activity needs, and coat type. After that, it’s “pretty much anything and everything about training, health and wellness,” she says.

The first spot, with the same title as the campaign theme, shows a range of animals as the voiceover repeats “This is not a dog.” Finally a beagle is shown and the voiceover goes on to give facts about the breed and share that the AKC has expert knowledge on dogs, but not the other animals.

“Tricks” shows a family trying to get an off-camera critter to fetch to no avail. Finally, the shot reveals it’s a goat. “Training, knowledge, resource, support….for dogs, not goats,” says the voiceover over images of dogs. “If it baaahs, we can’t help you. But if it barks, it’s AKC.”

The goal of the campaign is to make the organization feel relevant and relatable to all dog owners, from all walks of life, said Amy Small, senior vice president of creative and brand for Media Cause.

“Our hope is that dog lovers see the campaign, and walk away thinking ‘Huh, I understand the AKC a little bit better now, and they understand me, too. I’m a dog person. They’re dog people. We’re all in this together,’” Small says in a release.