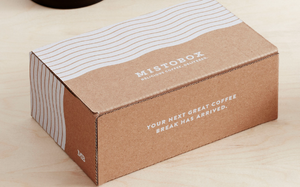 Do coffee and politics go together?

The new enterprise is called the MistoBox and Ballotpedia Coffee Cub.

Once Ballotpedia posts a link on its website to MistoBox, the coffee provider will gain broader reach beyond its digital marketing presence, which includes this video featuring company founders Samantha Meis and Connor Riley.

MistoBox is one of many subscription services that deliver personalized coffee selections based on user preferences. Its Netflix-like Brew Queue feature can be used to create an ever-change lineup of potential coffees—more than 600, from some 50 roasters.

Brew Queue also can be accessed with Amazon’s Alexa app.

Ballotpedia calls itself a “non-partisan, online encyclopedia of American politics and elections” whose insights are delivered via email updates, including the Daily Brew.

“Our hope is that each month, subscribers to the Ballotpedia Coffee Club will take the time to sit down and enjoy a new coffee picked just for them and learn about a key aspect of our democratic process—such as how primaries work, caucuses, and redistricting,” says Rhiannon Cook, head of growth at MistoBox. “We're hoping that we can take something that's complex, but very important, and help people educate themselves, one cup of coffee at a time.”

Another contender in coffee subscriptions is Trade Coffee, whose The Hookup service also matches users’ tastes with the most appropriate roaster.

When Trade Coffee got started, it sought to narrow down the wide breadth of coffee drinkers to a target audience consisting of people who were ready to change their habits, according to Tyler Horner, integrated media team lead at WITHIN, Trade Coffee’s agency.

“We found that the young, urban commuter was that person, but we went deeper to find even more precise segments based on differences in their current consumption habits and interests outside of coffee,” Horner tells Marketing Daily.

“We leveraged YouTube influencers to hit the male, home-crafts, do-it-yourself segment and Instagram Stories to hit the under-30, food-obsessed, female segment.”

Mobile messaging consultancy Reach3 Insights recently dug into subscription services and found that the key drivers of value are personalization, surprise and delight, according to Jon Dore, senior vice president and founding partner. “In other words, the ability for consumers to personalize their orders to their particular needs was critical—and those services that found a way to creatively include new items that build upon these personal preferences were particularly well received.”

When quick-serve restaurants like Panera—with its MyPanera offering—embrace subscription services, there are limits to such personalization, but there are other benefits. "A huge opportunity exists to highlight other new and interesting menu items via the increased store visitations to meet this inherent driver of subscription services,” Dore adds.