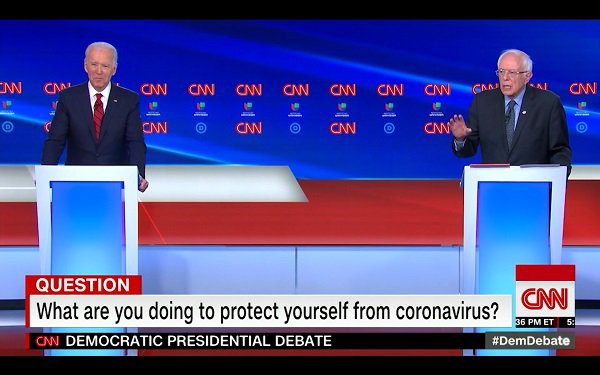 The last men standing in the race for the Democratic presidential nomination kept their distance Sunday night in a televised debate that was like no other.

It was certainly not the first time a campaign debate was held without a studio audience (although most debates have featured live onlookers). But it was the first one ever conducted during a bonafide national emergency stemming from a contagious illness.

As a result, debate combatants Joe Biden, 77, and Bernie Sanders, 78, were positioned far apart in a CNN studio in Washington.

The debate had been originally planned to take place in a theater in Phoenix. But the venue was nixed days before the debate as the coronavirus emergency gained momentum.

By Sunday night, the debate came on TV at the tail end of a weekend in which television was packed with coronavirus news and elected officials giving briefings.

Those who may have looked forward to the debate as a welcome alternative to all of the coronavirus coverage they had already absorbed for two days were quickly disappointed, since the pandemic was impossible to ignore.

On the contrary, it took center stage from the outset of the debate, and stayed there more or less continuously until the end.

The two-hour debate was seen live on CNN, which co-sponsored it along with Univision. The moderators were Dana Bash and Jake Tapper from CNN, and Ilia Calderón of Univision.

Credit Bash for undertaking the line of questioning that was likely on the minds of many watching at home. She asked these two elderly candidates for president what they were doing to minimize their exposure to the virus.

As almost everyone knows by now, the elderly as a group are considered to have a higher risk of contracting and possibly succumbing to the disease. In response to Bash’s questions, the debaters both detailed their regimens for hand-washing and avoiding physical contact such as handshakes with others.

In fact, they greeted each other before the start of the debate with the now-familiar elbow bump that has come to be widely adopted as a replacement for shaking hands.

Of course, shaking hands and otherwise interacting with supporters and potential supporters is a huge part of the process of campaigning for president.

In this regard, Sunday’s debate without an audience was a symbol for how the campaign might proceed going forward during this national emergency.

Among other things, the absence of crowd reactions to the various statements uttered by the candidates made for a debate that was much more subdued than any of the 10 Democratic debates that we have already seen since last June.

In addition, now that we are down to just two candidates, the whole nature of Sunday’s debate stood in stark contrast to the previous debates which featured as many as 10 candidates at a time.

In presidential campaigns, part of the calculus for getting exposure on television involves the staging of live events in which enthusiastic supporters are seen behind the candidates cheering and waving signs.

However, now that gathering in crowds has been forbidden, none of this imagery will be part of this presidential campaign. President Trump in particular must be disappointed that the rallies he loves are over for now.

The presidential campaign that has dominated the news media and generated considerable heat for the better part of a year or more now seems diminished as we face this new, unforeseen emergency.

The lack of rallies in barns and auditoriums, of public speeches and -- and possibly, no convention gatherings this summer -- will all have an impact on the campaigns.

The new normal will force campaign managers and their staffs to seek other methods for keeping the spotlight on their candidates as the story of the campaign takes a back seat to the coronavirus.

The pandemic is forcing all of us to stay at or close to home, where in the days and weeks ahead we will increasingly be dealing with the outside world in virtual ways rather than in person. Now, more than ever, the candidates will have to do the same.