Long-Term Ad Outlook Erodes For China, Will The Rest Of The World Follow? 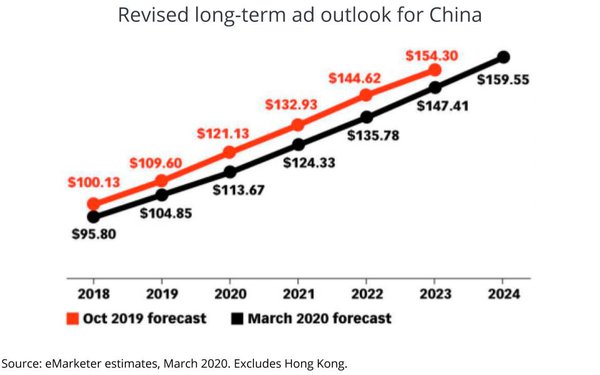 If China was the canary in the coal mine of the global Coronavirus pandemic, it also appears to be a leading indicator for a global ad recession. At least that's what a revised outlook published by eMarketer would seem to suggest.

The ad industry statsmasters, which released a pronounced downward revision on its 2020 ad estimates for both China and the global ad economy on Friday, this morning released a more detailed outlook for China's long-term ad growth through 2024 and by major medium.

The new outlook shaves billions of dollars out of China's long-term projection as a result of both the impact of the Coronavirus, as well as the residual economic recession it is expected to trigger.

“As people are forced to stay home during the outbreak, residents of China are buying fewer print newspapers and magazines,” eMarketer Forecasting Analyst Brian Lau states in the updated report. “Delivery services are also being interrupted. This means that the already struggling print ad market will see even lower demand.”

While a number of industry sources already are pointing to a global ad downturn, eMarketers' analysts have been explicit about it, noting: "We can already see China dragging down ad spending globally. In 2020, we expect total media ad spending worldwide will reach $691.7 billion, up by 7.0% from 2019. That’s a decrease from our Q3 2019 forecast when we expected worldwide ad spending to rise by 7.4% to $712.02 billion this year."
A survey conducted by Campaign magazine found its readers projects a 20% drop in ad spending due to the impact of the Coronavirus.

In its revised outlook, eMarketer currently projects estimates for worldwide ad spending will decline by about $20 billion or 3% from its previous projections. 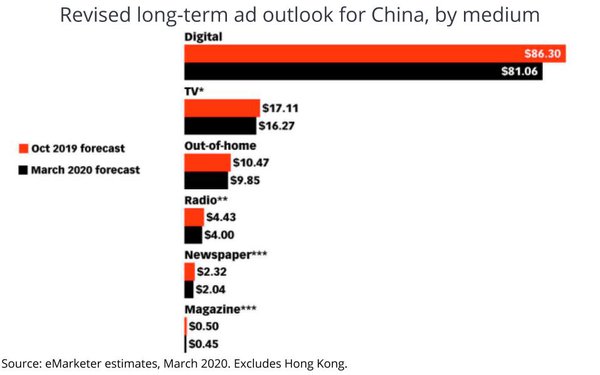