A Beer That's Also A Seltzer Is NOT A Beltzer, But A Spritzen 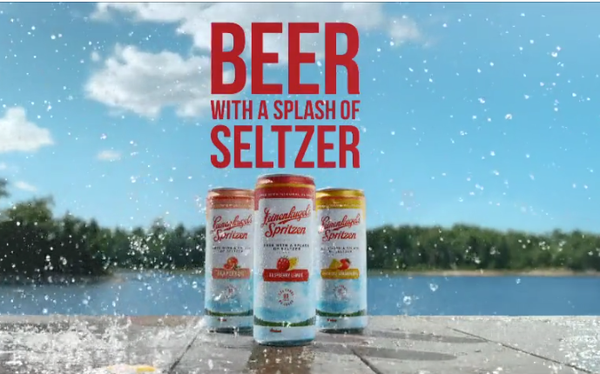 It was perhaps inevitable that, with the rise in hard seltzers and the general decline in premium beer sales, Molson Coors’ craft brewer Leinenkugel has decided to split the difference.

Introducing Leinenkugel’s Spritzen, the “beer with a splash of seltzer,” as it proclaims on its label. Spritzen means “splash” in German.

Leinie’s, as the beer brand has been called since it began in little Chippewa Falls, Wisconsin in 1867, still runs more or less independently of its Molson Coors overlord. It’s part of the beer giant’s Tenth and Blake craft beer division, but it’s been hanging with the big boys for a while. The old Miller Brewing Co. bought Leinenkugel in 1988.

“Because it’s a new-to-the-world proposition, our first job is to educate drinkers on exactly what Spritzen is,” says Erica Morris, senior marketing manager for Leinenkugel’s, in a statement on the Molson Coors blog.  “We’re hitting that sweet spot of people who still like the taste of beer but are looking for the attributes that hard seltzer delivers."

Those attributes include 93 calories,  2.2 grams of carbohydrates and no sugar (those are stats that play well in the seltzer business) and 4.2% alcohol by volume, which is exactly what Leinenkugel’s Summer Shandy fruit beer offers. A “regular” Leinie’s has 4.9% ABV.

Spritzen comes in three flavors: grapefruit, pineapple-strawberry and raspberry lemon, and the beermaker says it’s aimed at 21- to 27-year-old drinkers with an active lifestyle. That means, roughly, that they’re health-conscious.

Leinenkugel will support the new beer with a “social-media first” campaign with targeted TV commercials, radio and out-of-home advertising in some markets.

After a couple of years in which hard seltzers replaced craft beers as the newest kids on the block, combining the two worlds seems the logical next step. Competitor Anheuser-Busch InBev debuted Bud Light Seltzer in January, which is yet another variant on a theme: It’s a seltzer that carries the brand name of Budweiser’s mass-appeal, lower-alcohol cousin.

Overall, it seems large beer companies that own craft brewers are making an effort to introduce new light beers to muscle in where the old brands -- like Miller Lite, Coors Light and Bud Light -- once pretty much covered the field.