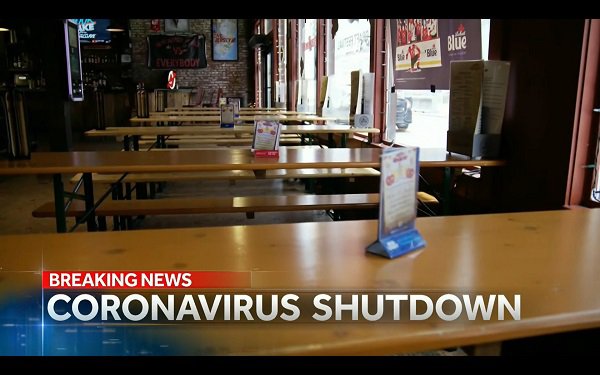 It is a rare and highly unusual circumstance for virtually all news media to be focused on one story simultaneously for an extended period.

This, in of itself, can lead to as much widespread anxiety as the actual story -- in this case, the current pandemic the world is now experiencing.

In one sector of the journalism world -- the one in which reporters, columnists and bloggers cover the television business -- it has been common in recent days to see columns and features positioning television (that is, the entertainment part of it) as a means of escaping the pandemic news and also for passing the time now that so many are cooped up at home with all outside entertainment venues closed indefinitely.

Our own contribution to this was a TV Blog the other day that predicted TV usage would spike during this period of confinement -- which was more of an obvious observation than a bold prediction.

Elsewhere you're seeing features in which websites and newspapers are providing lists of TV shows they are recommending for whiling away the home-bound hours by binge-watching.

However, escaping from the pandemic news is easier said than done. For all of the intentions to try and escape to the non-pandemic precincts of television, the continuous coverage of the pandemic and its consequences -- locally, nationally and internationally -- is proving irresistible.

It is exhausting to consume, and yet we cannot look away. One reason is that the story seems to change by the hour. It is anything but a static situation.

The numbers of the sick are on the rise, the stock market is down and sometimes up, and the politicians -- president, governor, mayor -- are on TV giving daily briefings on their latest mobilization efforts, and announcing new restrictions on how we move around our communities and go about our lives.

Some people are fond of applying the word “surreal” to times like these. I prefer to consign surrealism to art history. Instead, these times are not surreal, but real.

They are not the norm, however. Only a handful of times in our entire lives will most of us ever live through a continuous story like this one. Sept. 11, 2001, was the start of one of them. And for those of us old enough to remember, so was Nov. 22, 1963.

There really is no escaping the pandemic news. Nor should there be. It is important to be informed, even if it sometimes seems as if the media feeds us much more information than we can handle and, in the process, adds to the anxiety and confusion rather than clearing it up.

One can hardly blame the news media for all staying on the same story. Their news judgement is correct; at the moment, there is no story anybody cares about other than this one which happens to be impacting every aspect of our lives.

As it happens, I had a couple of other topics in mind for today's TV Blog, but did not feel quite right about devoting the space to another review of another new or returning TV show.

To be specific, I was leaning toward writing about the Hank Azaria comedy called “Brockmire,” a show I like very much that is starting its fourth and final season on IFC Wednesday night. But writing on the pandemic and the news media seemed much more appropriate.

Of course, there is no rule that says we all have to remain glued to the wall-to-wall coverage at the expense of everything else. Because it is on more or less continuously, we can check in and check out of it whenever we feel like it.

Maybe we can spare some time to watch something else, maybe “Brockmire,” for example -- a mere half-hour starting at 10 p.m. Eastern.