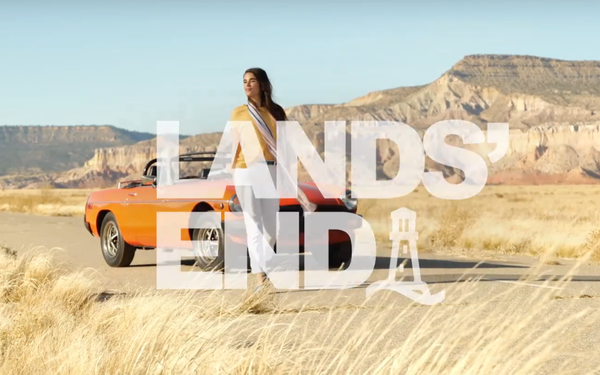 The strategic reinvention of Lands’ End -- including the success of its partnership with American Airlines and closing the book on its marriage to Sears -- is paying off. And the apparel brand is launching an ambitious new deal with Kohl’s.

Lands’ End says its fourth-quarter revenues rose 9.4% to $549.5 million, compared to $502.3 million in the fourth quarter of the prior year. It benefited from $40 million in launch sales of its American Airlines uniforms, a stepped-up demand for PJs, and ecommerce gains of 7.2%.

But in what sometimes felt like the longest break-up in retail history, Sears continued to weigh on the brand, with results pressured by a revenue decline of $21.5 million from Sears operations, with 49 fewer in-Sears locations than last year. Excluding the Sears impact, revenue would have increased by 14.3%.

Company execs are bullish on its prospects with Kohl’s, a retailer with far more impact on Middle America’s fashion choices than the still-not-totally dead Sears.

The entire Lands’ End assortment is scheduled to be available at Kohls.com by this fall, with Lands’ End handling fulfillment and shipping.

In 150 stores, Kohl’s will offer Lands’ End seasonal collections, including outerwear in fall/winter and swimwear in spring/summer. That effort, too, is set to begin in the fall. Some Kohl’s stores are scheduled to have a shop-within-a-shop set-up, much as Lands’ End did at Sears.

In a conference call for investors, Lands’ End CEO Jerome Griffith outlined the deal’s potential for building brand awareness and incremental sales. With headquarters just two hours apart in Wisconsin, “many of our customers are Kohl's customers,” he says, according to the Motley Fool transcript of the call. “And more importantly, given that the Kohl's customer shares many of the same demographic features of the Lands' End customer, we have an opportunity to expose our products to many more potential customers.”

Still, not all has been good news for Lands’ End this year. In January, Delta Air Lines workers — who have been wearing Lands’ End-made uniforms since May, 2018 — filed a lawsuit against the company, alleging that the uniforms made them sick, causing everything from rashes and blisters to sinus problems and respiratory illnesses.

Sears spun Lands’ End off back in 2014, and Lands’ End began exiting the chain in 2018. With Sears behind it, it has built up its own store expansion, with 26 stores in eight countries, and about 10 to 15 more scheduled to open this year.

Like many retailers, it has temporarily shut down its retail locations due to the COVID-19 crisis and says for now, it is holding off on any guidance about how that will impact sales.

Kohl’s, meanwhile, has stayed open, earning it the wrath and scorn of consumers and employees. Not only is it not paying sick leave to affected employees, it’s encouraging people to shop by promoting sales, despite public health guidelines for people to stay home unless making essential purchases.

“Stop sending out emails encouraging people to go shopping! You are putting your employees and the general public at risk. You don't sell groceries. Clothing is not a necessity right now,” writes one offended consumer.

“Wow. Tone deaf as hell. Do better Kohl’s,” says another.

Someone spoofed its long-running #KohlsCares hashtag. “If Kohl's Cares so much, why haven't you implemented store closures and paid time off to protect your customers and employees during this pandemic?”