At A Crucial Time For Smartphones, Many Wireless Stores Are Closing 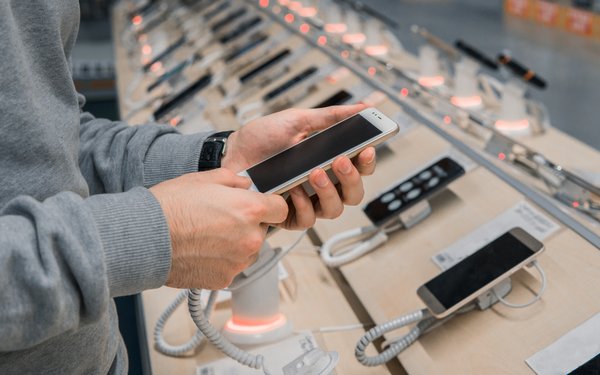 AT&T announced today it’s temporarily closing 40% of its U.S.-owned retail stores, the latest wireless operator to curtail operations because of the COVID-19 pandemic.

Separately, the Wave 7 research firm is reporting that a little more than half of the nation’s 28,000 phone stores operated by all of the major carriers are closed, are going to close soon or have severely curtailed hours.

AT&T said it also will reduce hours and close the remaining stores on Sunday, and will follow social distancing guidelines.

The effect will be felt by the wireless operators, of course, but also by Samsung and Apple, which will be losing their most effective selling platforms.

Jeff Moore, the president of Wave 7, estimates 80% of the smartphones in the U.S. are bought through wireless stores — and those two brands dominate sales.

As an example, Wave 7 reported that during the December holiday season, 95% of the phones sold at AT&T stores were either Samsung or Apple units. That statistic was 94% at Verizon and 91% at T-Mobile.

Earlier, Apple closed all 272 U.S. stores, and Verizon and T-Mobile both announced late last week that they would be closing some stores.

Moore says it appears that T-Mobile is attempting to keep one store open in all major markets -- but it announced it will close 80% of its owned stores, at least until the end of the month.

The major wireless carriers all have authorized dealer stores they don’t own that may have different policies during the crisis. Walmart and Best Buy also sell phones.

Stores in all sorts of businesses are closed or closing, but wireless carriers and phone manufacturers and wireless companies are in a peculiar spot.

During the crisis when more people will be confined to their homes, quality phone service is top of mind and sales ought to be brisk. But because of the threat of contagion, the very opposite may turn out to be true.

Moore points out that salespeople usually know how to compare phone prices and features better than online marketers do, sell other products like screen protectors, and can reprogram phones -- all in one transaction.

All of that, Moore said, gives the stores a kind of intimacy, but can also require relatively close person-to-person interaction.

“In an Amazon world, these brick-and-mortar stores still have value,” Moore said.

In a letter explaining  the closings, Jeff McElfresh, the CEO at AT&T Communications, wrote “In retail, our goal is to limit employees’ exposure while still upholding our responsibility to meet the essential needs of first responders and customers who are counting on us.”

He said AT&T’s call center capacity has also declined “because of the leave accommodations we have made for employees who are parents of children whose schools have closed and our employees who are at higher risk to the coronavirus.”

AT&T is “adjusting call center staffing levels and shifts to ensure proper social distancing. This may result in longer hold times for service,” he said.