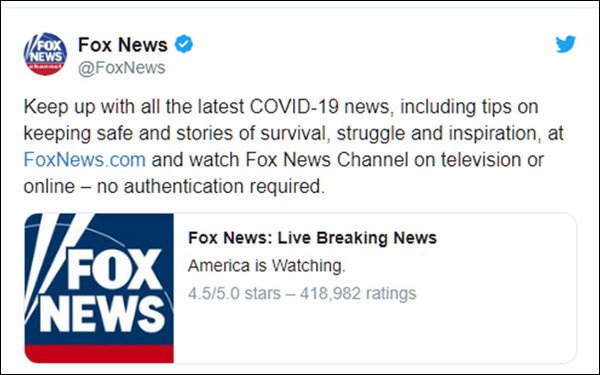 Fox Corporation is offering free unlimited access to its news channel and Fox television stations during the COVID-19 crisis.

Fox said it will work with its pay-TV partners to provide everyone in the U.S., regardless of paid packages, access to FoxNews.com, Fox.com, and the Fox News and Fox Now apps.

“Fox News Channel and Fox Television Stations are proud to provide Americans with free access to extensive urgent national and local news on the pandemic, serving as a critical resource during this unprecedented crisis,” said the company's statement.

Prior to President Trump’s conversion in recent days to acknowledging the seriousness of the pandemic in this country, Fox News had drawn criticism for some of its news hosts' echoing of Trump’s assertions that the threat was minimal and under control — even as Fox News management had begun warning its staff about the dangers of the outbreak and explaining the steps Fox would take to stem its spread within the company.