Kantar Analysis Indicates 2020 Ad Recession Likely To Be Fast, Pronounced For Most Media 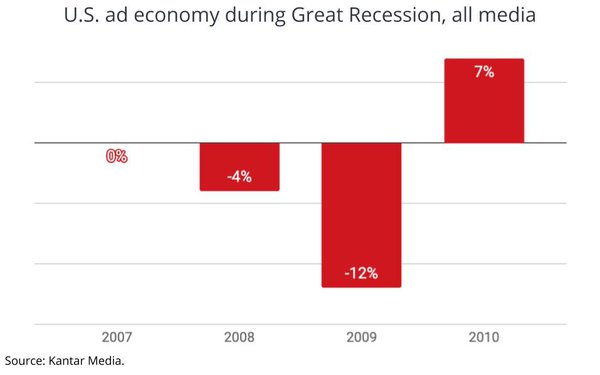 Historically, there have been pronounced lags for Madison Avenue both heading into and coming out of economic recessions, but the lag times have compressed considerably -- especially heading into a downturn -- in the 21st Century, according to special economic analysis conducted by Kantar Media.

The report shows that U.S. ad spending stalled almost immediately with the start of the Great Recession sparked by the financial industry collapse in 2007 and declined 4% in 2008 and 12% in 2009, before finally rebounding (+7%) in 2010.

The Kantar data also shows some interesting patterns across media, indicating that there may be some endemic factors impacting the elasticity by medium.

Mainly, it shows that a long-term correction of ad dollars exiting print media accelerated for both magazines and newspapers (although magazines rebounded a bit coming out of the Great Recession), while high-growth digital media remained relatively resilient, declining only 3% during the last year of the recession in 2009, before rebounding again at double-digit growth rates in 2010.

While the past may not be prologue for a recession beginning in 2020, some patterns for its effect on the U.S. ad economy appear likely, according to Kantar Media Chief Research Officer Jon Swallen.

The lead and lag time going in and coming out likely will follow the Great Recessions patterns.

They have "narrowed," he says, "because of measurement and tracking advances."

"Marketers get a quicker read on what's happing in the marketplace," he continues, noting that marketing and media expenditures have increasingly shifted toward just-in-time models.

That logic will likely continue to bode well for digital media, because they generally are more data-driven and responsive than most legacy media.

"Digital media enable marketers to adjust campaigns more quickly as compared to linear media like TV or print," he explains, emphasizing, the "net result: the lead/lag cycle has gotten shorter."

In recent weeks, MediaPost has begun checking with advertisers and media buyers on prospects for their network TV upfront cancellation options, because in the past, they have proven to be strong early indicators of downturns in ad spending.

Upfront advertisers historically have the right to cancel as much as 50% of their ad commitments for the first- through the third quarter, but they must give at least 60 days notice to the networks. During our last check, we confirmed that second-quarter options held firm, but buyers and sellers agreed that third-quarter options would likely be a harbinger of ad demand, especially heading into a new, and unprecedentedly unpredictable upfront negotiating season for the 2020-2021 television marketplace.

Based on historical precedent, May 1 would be the deadline for upfront advertisers to exercise their third-quarter 2020 cancellation options.

Check today's edition of Research Intelligencer for a deeper dive into Kantar Media's economic recession advertising analysis, including which ad categories were most/least resilient and which media lost or retained the greatest number of advertisers. 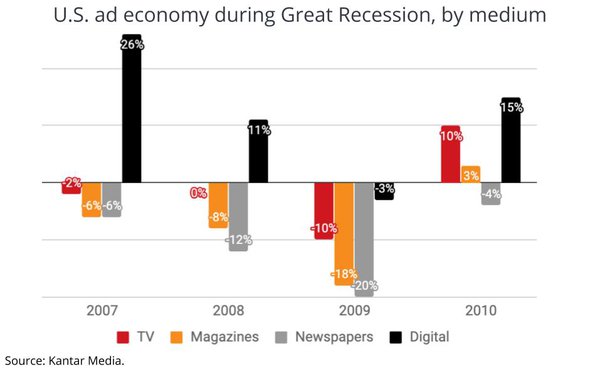