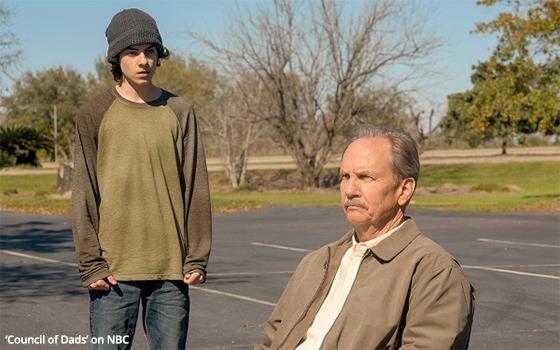 Few things are more fake than when TV tries to reproduce real life.

Exhibit A arrives this week on NBC -- a scripted drama about a cancer diagnosis that is premiering in the midst of a real-life pandemic in which about half the headlines are about death.

Not only is this series ill-timed, but it is tone-deaf as well. Titled “Council of Dads,” the show is about a man dying of cancer (played by Tom Everett Scott) who devises a plan for continuing his kids’ upbringing after his death. He will form a Council of Dads.

These are close male friends (three of them) who will be tasked with the responsibility of imparting to this man’s fatherless children the life lessons he would have imparted to them if he had only lived. This show is adapted from a book from the same name.

If the book was anything as treacly as this TV show, then readers of the book must have had sap running down their arms and dripping off their elbows. This show would seem to be an attempt by NBC to re-create the “real-life” feel of “This is Us,” which has been a huge success for the network.

But it is not even close. Nothing feels realistic about this family and the lifestyle they lead. Instead, they seem to have been conjured from the minds of writers and producers who then likely had their material and ideas further refined and squashed by committees of network execs.

The family consists of the aforementioned cancer-stricken man and his wife, and their four children.

They are all stereotypes: A truculent 16-year-old boy, an adopted, studious 13-year-old Asian girl, a little boy in either kindergarten or first grade who turns out to be a biological girl who identifies as a boy, and a grown, young adult daughter who is at least part African-American. She is the dad's daughter from a previous relationship.

This touch-all-the-bases family lives in splendor in a big house that looks as if they won it in an HGTV Dream Home Giveaway. It is located overlooking a body of water somewhere east of Savannah.

The cancer-stricken dad's occupation, from which he might have made a financial contribution to his family's heaven-on-earth lifestyle, is not specified. The wife (played by Sarah Wayne Callies) is an ob-gyn. If she is the family's primary breadwinner, then she is doing very well indeed.

Thus, this family not only lives a life that 98 percent of the rest of us might envy, they also have access to top medical care, another thing that can often frustrate the rest of us (whether or not there is a pandemic going on).

Suffice it to say that the life of this family is TV-idyllic -- which means it bears no relation to anything anyone who is watching it is ever likely to experience.

But wait. There's more. In the offhanded conversational way in which dialogue is rendered by the current generation of TV writers in slice-of-life dramas such as this one, the characters manage to flatten and diminish at least two well-known tragedies.

One is the story of Anne Frank. In the show’s opening scene, the little boy is seen trying to get over his fear of swinging out into a body of water from a rope suspended from a tree while the rest of the family looks on and encourages him.

This is when the 13-year-old, clutching a copy of “Anne Frank: The Diary of a Young Girl” that she is apparently reading in school, advises him to pretend that Nazis are after him, like they were after Anne Frank. And if he doesn’t jump, he risks being imprisoned in a concentration camp.

After I absorbed this scene while watching the premiere episode of “Council of Dads” last week, it occurred to me that I haven’t heard dialogue about World War II in a TV show this tasteless and atrocious since “Hogan’s Heroes.”

By the time the cancer-stricken dad is seen later in the episode casually telling the story of actor Christopher Reeve and his eventual death years after the tragic horse-jumping accident that crippled him, I had had more than enough of “Council of Dads” -- and the “council” of the title had not even been formed yet.

No bad joke intended, but this show is dead on arrival.