How Agencies Are Boosting Morale, Camaraderie In WFH Mode 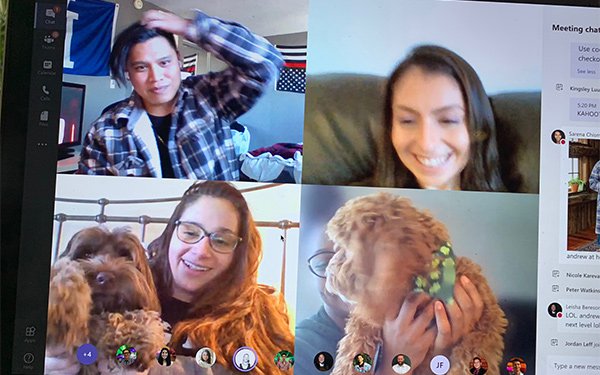 As the industry shifts to embrace the new normal of working from home, agencies are introducing unique strategies to keep their team members happy, healthy, and sane.

One emerging quirk is the fascination colleagues have regarding their fellow team members’ (and bosses’) personal lives.  "There's a curious new intimacy with coworkers now, seeing them in their homes, in front of headboards and microwaves, with kids and pets jutting into the frame,” says Alison Hess, group creative director, Code and Theory. “There's a gritty sense of camaraderie that's unbound by normal hours or personal styles.”

Both Jam3 and Canvas Worldwide hosted their version of MTV “Cribs” that followed the lives of the rich and famous behind closed doors. The “Canvas Cribs” version provided glimpses into private lives of their fellow colleagues as they showed off their respective digs.

Meanwhile, Jam3 is mimicking Vogue magazine’s 73 Questions video series by selecting one member of the agency to give a 15-minute tour of his or her home and take questions.

“It’s surprising and heartwarming how much we all enjoy getting to know each other at a deeper level, especially during these times when we must be physically apart,” says Adrian Belina, co-founder and executive creative director at Jam3. This so-called “Jam3 Cribs” takes place every day at 4pm.

California-based agency Mering is banding together its employees (now ordered on a complete lockdown by the state) with virtual workouts. Each day, executive producer Liz Ross shares a workout that can be done from anywhere, using body weight and easy on-hand equipment like cans of tomatoes.

The agency is also launching a virtual "WFH scavenger hunt" via a dedicated team Slack channel on Friday. Employees will be sent details of specific household items across the course of the working day. The first person who posts a selfie with the item in the slack channel first gets a point. The person who has accumulated the most points by the end of the workday will be proclaimed the winner.

Muros, a Chicago-based shop that produces artwork for brands like Shake Shack and Stella Artois, is keeping its freelance talent base employed with a digital creative campaign titled #MakeWithMuros. The agency will commission 30 creatives across the U.S. (and pay them) to produce art that promotes “positivity, laughter, hope and togetherness.” Art will then be posted to Muros’s social media profiles and available for purchase.

In addition to the house tours, Canvas Worldwide hosted its first “virtual happy hour” on Wednesday to bring together scattered members across all six of its offices. The event included trivia with gift-card prizes from partners like Facebook, Twitter, 4C and Snapchat as well as general gossip and conversation.

Earlier in the week, Code and Theory scheduled a virtual “all-copy coffee” in which two writers baked homemade versions of scones that are usually provided during the regular office gathering.

The ability to balance novelty with normalcy in this unprecedented climate is challenging, says Code and Theory’s NY managing director Ben Berentson. He recommends trying to replicate the best things about working in an office as much as you can without going overboard. This means still having teams do video meetings as well as encouraging managers to use quick five-minute calls or Slack to reach out and check in with their coworkers. “It is the same as you would walk around the office,” he believes. “It's important to harness the creativity and team spirit that everyone is showing and spread it around the agency as best as you can."

His agency piloted several of its project teams to work remotely for about a week to “get ahead of the curve somewhat” before the mandate expanded agency-wide. “One of the most important things leadership can do is to be as open and transparent as possible about what is working and what isn't and try to share learnings from areas of the organization that are seeing success as soon as possible.”

agency
1 comment about "How Agencies Are Boosting Morale, Camaraderie In WFH Mode".
Check to receive email when comments are posted.
Next story loading