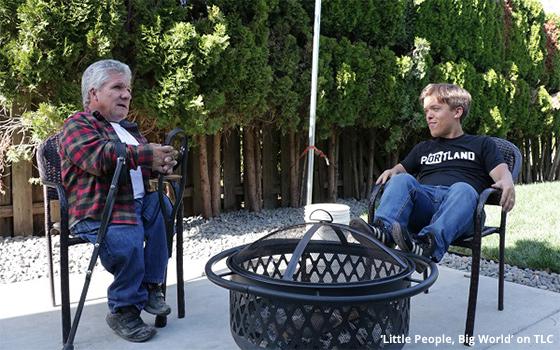 If “Little People, Big World” teaches us anything, it is that many of the challenges little people face as they go through life are little different than everybody else’s.

That’s the lesson to be gleaned from the first of a slate of new episodes of the long-running TLC reality series, a show whose beginnings date all the way back to 2006.

Needless to say, but 14 years is an eon in television time -- perhaps more so these days when one contemplates how much TV has changed since any of us first laid eyes on little people Matt and Amy Roloff so many years ago.

Back then, the point of the show, at least in part, was to educate the rest of us about dwarfs and the struggles and inconveniences they face in a world that is not built for them.

That message was received -- aided by the addition of subsequent reality shows about real-life little people such as “The Little Couple” and “Seven Little Johnstons” on TLC, and to a less tasteful extent, the “Little Women” shows on Lifetime (not to be confused with various TV and movie adaptations of the 1868 novel “Little Women” by Louisa May Alcott).

More recently, the big reveal about the lives of the little people of “Little People, Big World” is that aside from the many ways in which the world is not physically configured for their size, they lead lives characterized by ups and downs just like the rest of us.

This is the situation in which we find the Roloffs as they return Tuesday on TLC. In the first of them, which the TV Blog previewed last week, issues related to the ramifications of their size are barely touched upon. Instead, the show continues the saga of Matt and Amy’s divorce, or more specifically, its aftermath.

Their marriage began to unravel some years ago, and neither the Roloffs nor the show have shied away from telling this story on TV.

They were married for about 30 years. They raised a family (including their now grown-up son Zach, a dwarf, who is married with children of his own) and together ran an Oregon farm. It is the kind of farm that invites visitors for seasonal activities such as pumpkin picking in October. (Matt and Zach are pictured on the farm above.)

Now though, along with their marriage, Matt and Amy’s collaboration in running the Roloff Farm is also kaput. In the episode airing this week, Amy and Matt are seen living in two separate houses on the property, with Amy undertaking the process of house-hunting in order to move away.

For those who have followed the travails of this family over the last 14 years, observing the friction on display between Matt and Amy is an unhappy experience, although some might prefer the word “poignant” to the word “unhappy” here.

Under the supervision of producer Gay Rosenthal (whose Gay Rosenthal Productions has produced this show since the beginning), the episode (and presumably subsequent episodes as well) includes enough happy or at least hopeful news to counterbalance the sadness of Amy and Matt’s breakup.

Among other things, Zach and his wife are expecting a child -- their second. And both Matt and Amy are in relationships that might result in new marriages for each of them.

At various times during the run of this series, decisions were made to discontinue it, and announcements were made that it was over. But like Lazarus, “Little People, Big World” keeps rising from the dead.