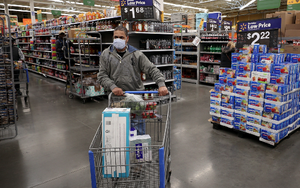 As the head of the seven-store grocery chain Stew Leonard’s put it this week on a cable newscast: “I think the storm is over right now. Things have settled down.”

President and CEO Stew Leonard Jr. was addressing the wave of consumers stocking up on food and household items in Connecticut, New Jersey and New York in response to COVID-19.

On Monday, financial services company UBS issued a report examining the dynamics of the nearly $1.5 trillion U.S. food market, with modeled comparisons to the recession years of 2008-09.

Typically, the food market is 51% to 49% in favor of food consumed away from home. But “given the recent series of restaurant and school closure announcements, we believe household food purchasing behavior is likely to pivot more aggressively to at-home consumption than in prior recessionary periods,” including 2008-09, the report concludes.

In dollar terms, restaurants usually represent 76% of “food away” spend, while schools are 9%, according to UBS.

Under the UBS baseline, if schools/restaurants are closed for 30 days, spending on food at home could increase approximately 5% year-over-year (a rise of $52 billion) and food away from home would decline by 7.3%.

In a prolonged schools/restaurants closure scenario (90 days), UBS estimates that food at home spend would increase 17% and food away spending would decline by about 23%.

Apropos of Leonard’s comments, Nielsen said sales of easy-to-stockpile staples like dried beans rose about 84% in the four-week period ended March 14, black beans were up 52%, rice 64% and tuna 52%.

The UBS report also highlights the risk that food providers face based on their dependence on having their food consumed in channels like restaurants.

Atop the food pack is plant-based meat substitute marker Beyond Meat, whose sales exposure to on-premise food consumption UBS cites at 51%. This is considerably larger than the next most-exposed company, General Mills, at 13%.

Today, Goldman Sachs downgraded its neutral rating on Beyond Meat’s stock to a sell rating, based in part on the company’s dependence on foodservice distribution. In the past year, the company’s stock has been as high as $239 per share. As of this writing, it was approximately $67.

On March 11, Beyond Meat announced that its Beyond Breakfast Sausage will begin to appear on retail shelves by the end of the month.

Impossible Foods is also feeling the crunch of COVID-19-related restaurant shutdowns, as it’s distributed in more than 15,000 locations. On March 16, Reuters reported that the company had raised $500 million in a funding round—only to report one day later that Impossible Foods was discussing a new credit line worth several hundred million dollars with its lenders.