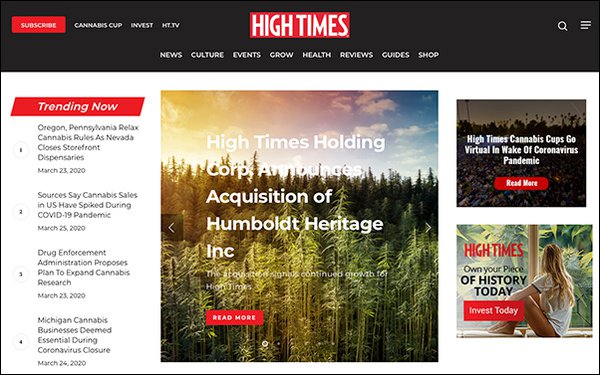 The publisher of cannabis-focused magazine brand High Times will soon own a cannabis plant producer, the first to be bought by Hightimes Holding Corp, which owns a number of marijuana-focused media companies and events.

“High Times mission is to connect consumers to cannabis — not only the best access and experience, but the best products available to our consumers across the country, and eventually the world,” stated Adam Levin, Hightimes Holding Corp. CEO.

He added: “This addition adds 200+ of the best cannabis-producing farms in the world, and the rest of the capabilities we’ll need to develop and grow into the future into the High Times family!”

Levin said he envisions the farmers of the Humboldt Sun Growers Guild to become a featured part of the company’s cannabis events.

"This allows our cultivators' and their artisan brands unprecedented exposure to consumers as High Times reaches millions of people all over the world," stated Barry Nachshon, CEO of Humboldt Heritage Inc.

He added: "Knowing that we will be part of the High Times family, as well as a key manufacturing and supply chain partner as the company enters the retail and delivery markets in California is very exciting for our team.”

High Times is in the process of launching an IPO.
brand marketing, magazines
Next story loading