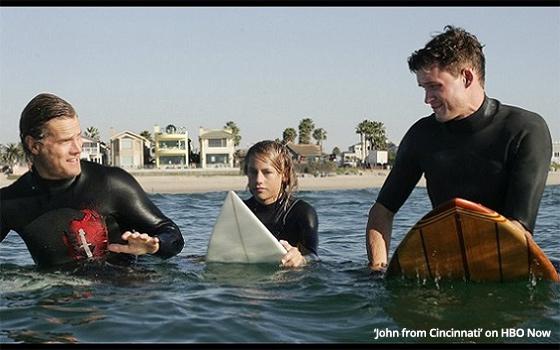 For proof that no TV show ever really dies, look no farther than “John from Cincinnati.”

Not that very many people have probably noticed this, but this short-lived 2007 series for which HBO seemed to show little love back then is among the many HBO shows that are available to stream on HBO Now.

Actually, a look at the list of offerings on HBO Now would appear to indicate that every HBO series since the beginning of time is available there. And why not? It must not cost that much to post old TV shows on a streaming site.

Making so many of them available simply means greater variety for subscribers -- and, it stands to reason, more users (i.e., subscribers).

Still, I was surprised to find “John from Cincinnati” because I had long assumed (idiotically, in retrospect) that even HBO had forgotten about it.

The show lasted for just one 10-episode season in the summer of 2007, and was canceled the day after the season ended. Fun fact: It premiered on June 10, 2007 -- right after the series finale of “The Sopranos.”

“John from Cincinnati” may have been unmemorable for many, but it is the show that always comes to mind when anyone asks me the recurring question: What is my favorite show from all the years I have written about television?

And I never mention “John from Cincinnati” because the people asking me this question likely have never heard of it. But now it is out in the open: This is the show.

I loved this series about a dysfunctional family of southern California surfers written principally by David Milch. For those with time on their hands during this period of confinement, I highly recommend it.

And thanks again to all of today’s current technology -- especially where the distribution and availability of just about every show that has ever aired is concerned -- for making a show as obscure as “John from Cincinnati” available to enjoy (or, in the case of this show, become totally perplexed by).

But wait. There’s more. The other show that has long come to mind whenever anyone asks me that recurring question is a four-part, British-made miniseries from 2002 -- “White Teeth,” adapted from the novel of the same name by Zadie Smith. It was first seen in America on “Masterpiece Theatre” on PBS in 2003.

This was the best miniseries I have ever seen, period. But I have long considered it to be as unknown and long forgotten as “John from Cincinnati.”

To my knowledge, it had not been seen in America since 2003 -- which just goes to show you how extensive my “knowledge” is.

The other day, a Google search revealed that “White Teeth” is available to watch in several places -- including YouTube TV and Acorn TV, the streaming service of all-British TV content.

This was an exhilarating miniseries, and though I have not laid eyes on it since 2003, it remains a memorable milestone in my long (and frequently disappointing) career of watching TV professionally (please stop laughing).

In “John from Cincinnati,” the “John” in the title is John Monad (played by Austin Nichols, pictured above right), who suddenly appears in this southern California beach community seemingly from nowhere (and possibly not of this Earth).

He is given to spouting simplistic non sequiturs, but despite this, or possibly because of it, he begins to exert an almost spiritual influence on the colorful residents of this seaside town.

When the show was canceled that summer of 2007, I somehow got David Milch on the phone to talk about it and help me understand who this John Monad character really was.

In response, Milch gave me a quote that I have thought about a lot lately in the context of the strange times we are all living through now.

Among other challenges, we are all trying to absorb and understand a cascade of information from which understanding often proves elusive -- even in an era that has literally (and somewhat paradoxically) become known as the Information Age.

“He was a variable creature of enormous energy and power, and very little understanding,” Milch said of John Monad. “And that, to me, is kind of what the world is like.”