2 Timely Stories From My Royal 10 Typewriter 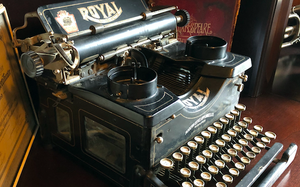 I love old typewriters. My favorite is a 1917 Royal Typewriter 10, made by the Royal Typewriter Company of New York (see above). It is a beautiful piece of engineering, with intricate and mysterious mechanical connections revealed by two bevelled glass windows on each side. It was made in a factory in Hartford, Connecticut.

My Royal 10 is pretty beaten-up. There are parts missing and it’s far from functional. But that only adds to its gravitas and charm. It sits beside me in a special place in my office as I write this on an Apple MacBook Pro, circa 2018 -- two examples of technical elegance separated by a century. I suspect, though, that the MacBook won’t be on anyone’s desk in 2120.

Last week, I told you about the Lost Generation. If I had been part of that generation, I would probably be writing this post on that typewriter.  Today, I wonder what other stories it might have to tell.

With that, I’d like to pick up where I left off last week and share two stories that I like to believe lie buried in the Royal 10’s mechanical magnificence. I hope they're stories that have something to relate to us in our current reality.

First, the Royal 10 was introduced in 1914, the start of World War 1. It was Royal’s first “upright” design and, along with the Underwood 5, would become a trusted workhorse for many, including news reporters. Much of the coverage of the war, and later, the Spanish Flu epidemic of 1918-1920, was probably hammered out on a Royal 10.

But here’s the interesting thing. The 10 represented a pinnacle of typewriter design. Other than cosmetic changes, the inner workings of the typewriter didn’t change for decades after its introduction. That meant most of the major developments of the next 20 years would also be written on a typewriter like the one that sits in my office.

As the world rolled out the 1910s and into the 1920s, my Royal was one of the few things that didn’t change. The double gut punch of a global war and a massive pandemic rocked the world back on its feet, but not for long. After a brief but deep recession in 1920 and ’21, a global explosion of creativity and enterprise transformed everything. The Roarin’ Twenties ushered in technological revolutions on multiple fronts, including the automobile, aviation, movies, radio, telephones, electricity and medicine.

Society was radically transformed in the Twenties. Jazz and speakeasies flourished. In the U.S., women cast their first votes. Culture was transformed by writers and artists who were both more liberal in their themes, and more apt to criticize hypocrisy and greed. Art deco became the dominant design movement of the decade.

The story is this: After six years of devastation and destruction, the world entered eight years of explosive creativity and change.

That brings me to the second story. The Royal Typewriter Company had to shift gears in 1940. The factory in Hartford no longer built typewriters, but began manufacturing machine guns, rifles, bullets, propellers and spare parts for airplane engines as part of American industry’s support of the war effort. Royal wouldn’t go back to building typewriters until September 1945.

You, like me, may have become tragically addicted to pandemic models that show the importance of flattening the curve. These models have one thing in common: a flat horizontal line that represents our current capacity to handle the crisis.

But is that line necessarily flat? Just like the Royal Company in 1940, industry is once again ramping up to defeat a common enemy. This time, it’s face masks instead of machine guns; ventilators instead of propellers. The output is different, but the motivation is the same: We can beat this thing.

Again, history may provide a little perspective. In 1939, the U.S. was the furthest thing imaginable away from being ready for war. General George Patton was given command of a unit of 325 tanks desperately in need of nuts and bolts in order to keep working. After unsuccessfully trying to order through official channels, he ended up ordering from a Sears catalogue and paying for them himself. The American army was so short of equipment it would borrow Good Humor ice cream trucks to stand in as tanks when they practiced military maneuvers.

Despite this, by 1945, American industry had produced two-thirds of all the weapons and equipment used by the Allies to win the war. That happened because thousands of companies like the Royal Typewriter Company unified behind a common goal. Chief executives worked for $1 a year. Volunteer laborers worked double shifts. Factories retooled their production lines. Capacity expanded exponentially when it had to, because it’s not a static flat line.

I think my Royal 10 is trying to tell me two things. One I need to remember going into this crisis, and one for when we eventually come out of it.

First, we can do amazing things in the face of incredible adversity when we have to. We just need a little time to be our best.

And secondly, humans tend to bounce higher when we’re on the rebound from adversity.