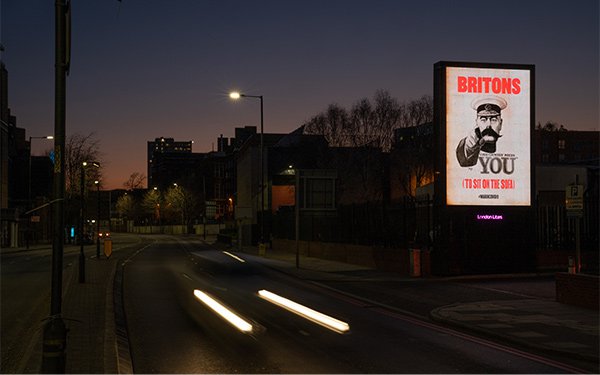 UK creative duo James Hodson and Jason Keet, with Engine Group agency WCRS, have created a set of public health information posters based on posters from the first and second world wars. Their versions are adapted for the war against COVID-19.

Initially released on social media, the posters are now running on digital out-of-home in 27 sites across London during the city’s lockdown, thanks to a collaboration of industry executives on both sides of the pond.

The poster campaign--called “WarOnCovid19”--was created to give people clear instructions about what to do in the crisis.

Hodson and Keet, who have worked together for a decade, came up with the idea after they noticed people still weren’t taking social distancing seriously and believed more effective messaging was necessary. The creative approach--modern takes on old war posters--was selected because the original posters were seen as very effective at persuading people to behave in certain ways.

The suite of 10 ads includes “Loo roll” which aims to make people think about whether they need that extra pack of toilet rolls. “Nurses” encourages people to leave food on the shelves for health workers and “Daddy” invokes a classic wartime ad to encourage people to stay in.

Mark Fallows,  one of the founders of the New York-based Fabrica Collective (and a UK native) saw the posters on LinkedIn and believed they could be even more effective in outdoor displays where people not adhering to the lockdown hopefully would get the message.

“As the impact of the Covid19 spread I asked our Collective who was stepping up and producing cut-through public service messaging,” Fallows said. A London colleague put him touch with the two creatives. He then reached out to Laramie and “three days later, the posters were live in London.”

The collaboration, Fallows added, “validates our vision of networks working for the collective good, in a fast, agile, ego-less way.”